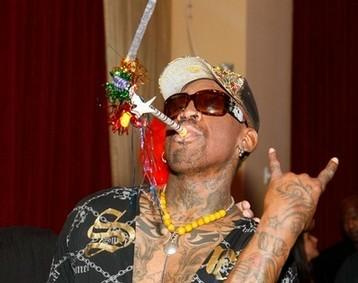 Dennis Rodman is back in North Korea with some fellow former NBAers to play a game for Kim Jong-Un’s birthday. David Stern does not approve. “The NBA is not involved with Mr. Rodman’s North Korea trip and would not participate or support such a venture without the approval of the U.S. State Department,” Stern said in a statement. “Although sports in many instances can be helpful in bridging cultural divides, this is not one of them.” Rodman, who has made multiple trips to North Korea, brought with him Cliff Robinson, Doug Christie, Kenny Anderson, Vin Baker, Charles Smith, Sleepy Floyd, Craig Hodges and four other streetball players to play an exhibition game. CBSSports.com