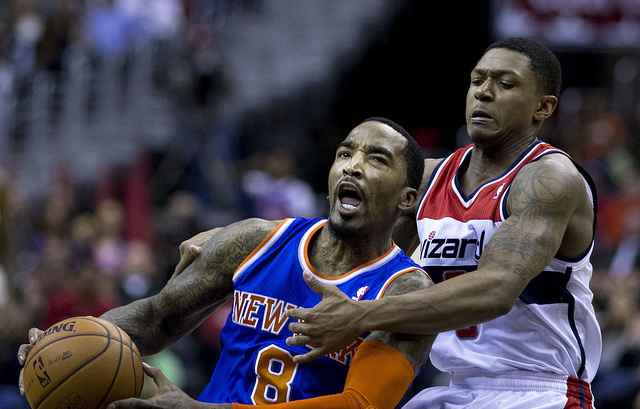 Having coached J.R. Smith for five years in Denver, former Nuggets coach George Karl believes he knows what’s best for the Knicks’ knuckleheaded guard: Smith needs to get out of New York, Karl said, and on a team with veterans who will hold him accountable for his childish behavior — the San Antonio Spurs or the Miami Heat, for instance. “There’s that possibility,” Karl said on ESPN New York 98.7’s FM “The Michael Kay Show” on Thursday. “I think right now that’s the position, if I was J.R.’s agent. (I would take). I would be looking at a culture where there would be more peer pressure.” Karl said the Spurs have been interested in Smith, who was a free agent this past offseason before signing a three-year, $18 million contract with the Knicks. “I know (the Spurs) have thought about bringing him in,” said Karl, an ESPN analyst. “San Antonio doesn’t make a lot of mistakes.” The Knicks appear ready to get rid of Smith and the headaches he brings. On Wednesday, the NBA fined him $50,000 for untying or trying to untie the shoelaces of opponents in recent games against Houston, Dallas and Detroit. Newark Star-Ledger