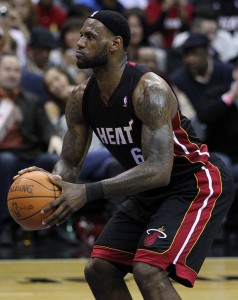 There’s no basketball player on the planet who is better than James. It’s fitting then, that as a scorer, LeBron James continues to assert his ridiculous dominance in the league’s most important spot — near the basket. This season, 39 players have attempted at least 200 field goals inside of eight feet. Only one of these players has made more than 66 percent of his shots; that would be LeBron James, who has made almost 77 percent of those shots. That’s insane. Grantland

Check out Grantland’s article for the accompanying infographics on James’ and other players’ percentages on different spots on the court.

Rounding out the top five shooters in the league are Dirk Nowitzki, Jose Calderon, Wes Matthews, and Arron Afflalo.