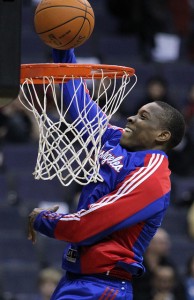 ESPN.com reports the prognosis, noting that the explosive fourth-year guard might have suffered meniscus damage. The Arizona Republic confirms the planned surgery, adding that additional details are expected to be made available on Friday.

Bledsoe, 24, is in the midst of a career year after the Clippers traded him to the Suns last summer. He is currently averaging 18 points, 5.8 assists, 4.3 rebounds and 1.5 steals, all career highs, while shooting a career-best 48.6 percent from the field. His 20.2 Player Efficiency Rating (PER) ranks No. 8 among point guards in the NBA.

The news comes a little more than a week after Bledsoe last stepped foot on the court. He played 31 minutes against the Clippers on Dec. 30, and has been sidelined for Phoenix’s last four games.