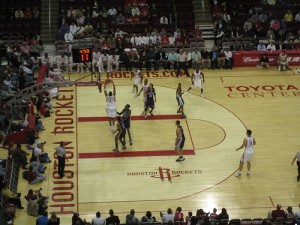 There was a pair of rain delays at an NBA game on Saturday night, a curious happening followed by another strange turn of events: The Houston Rockets built a 25-point lead, lost all of it and then some, then rallied from five down late in the fourth quarter for a 114-107 win over the Washington Wizards.

A leak in the roof caused the officials to hit the pause button 9 seconds into second quarter and again at the start of the second half. Two trash cans and an array of towels were spread at the midcourt line close to the scorer’s table during the first delay to catch the apparent remnants of the heavy rains that had fallen in the area for much of the day.

Several people were in the rafters, seemingly trying to fix the problem. Howard passed the time with a couple of young fans who had been sitting on the front row, playing blocking their shots.

When play resumed, the Rockets went on a 34-13 run to seemingly break open a tie game.

Officials also delayed the start of the second half, and the towels and one of the trash cans appeared. The Rockets, already with a 17-point lead, again were able to get themselves in gear faster than the Wizards, going on a 15-7 run after the restart. Associated Press