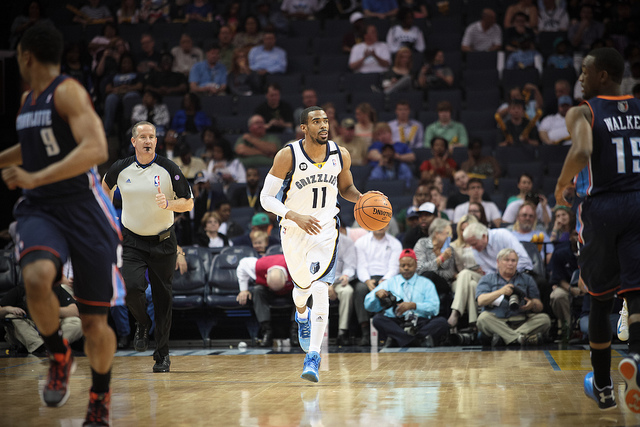 When Marc Gasol went down with a midseason knee injury, it looked like the Memphis Grizzlies were in a world of trouble. Losses piled up and there were even whispers locally of shutting Gasol down and seeing what the team could get out of the draft. Since that point, a few interesting things have happened. The Grizzlies added James Johnson and Courtney Lee, while Tony Allen and Tayshaun Prince have been battling injuries, infusing the team’s wing position with athleticism and shooting. Couple that with the emergence of Ed Davis from an early season slump and Memphis has started to solidify it’s lineup. The only thing they were missing was someone who could take the load off Randolph from a scoring standpoint, and take over games when needed, which is something Gasol had a knack for doing.

In steps Michael Conley, Jr. The 26-year-old point guard out of Indiana by way of Ohio State has found an expanded role in the Grizzlies offense under the tutelage of first-year coach Dave Joerger. Conley was drafted on the assumption that he could one day resemble Tony Parker, and with Joerger’s more wide-open, pick-and-roll oriented offense Conley has found the freedom to morph into that type of player. We saw signs of what Mike Conley could be in the playoffs, when he was the best player on the floor for stretches, even though he has been matched up against players like Chris Paul, Tony Parker and Russell Westbrook for the past few years, but now he seems to be becoming a full-time star.

Parker plays in a way that’s easily recognizable, yet rarely seen. Most point guards play a perimeter oriented game, bounding around the arc and only penetrating when they see an open lane. They can range anywhere from timid to opportunistic when it comes to attacking, but Parker, and now Mike Conley, present a different problem. The spacing that Johnson and Lee bring will undoubtedly help Gasol and his paint partner Zach Randolph, but Conley has also become a beneficiary with the newfound space. Conley attacks the paint with force and finesse, finishing through and around bigger defenders, but never seems out of control.

If you have ever watched a mouse run through a maze (stick with me here), you have seen Parker or Conley play basketball. The mouse goes full speed until it reaches a dead end, then turns its head, undeterred, and tries again. The mouse is stubborn in its actions, but eventually achieves its goal nearly every time. Parker, and more recently Conley, have taken on this trait. Conley put on bulk last offseason, allowing him to play more of an inside-oriented game, and that is what he has done. He dives into the paint, and if he finds someone in his way, he uses a spin or hesitation step to curl back around or pull the ball out. It’s a constant motion that is both fluid and determined at the same time. For Conley, getting cut off at the elbow does not mean he has to give the ball up, it just means he has to change his variables to solve the same solution.

Now, with a new strategy in place, Conley has been able to take advantage of this style like he never has before. He has been putting up 21.8 points per game in January (his career high is 14.6) and is adding 7.5 assists and 1.8 steals to his nightly performance. In his past three games, he has eclipsed the 30-point mark twice, and added a 21-point, 13-assist performance against the Atlanta Hawks. It might have taken a few months for the team to buy into Joerger’s pick-and-roll policy, but it seems to finally be paying off for both Conley and the team. Paired with a more attack-oriented style, Conley has raised his efficiency to new heights. In the new year, Conley is putting in 50 percent of his attempts from the field, 48 percent from deep, and 89 percent from the free-throw line. He is also getting easier baskets, scoring more from the three-point line and free-throw line than from mid-range. While I realize that January is young, the stretch he is putting together is the best of his career.

Now what does this mean for the team as a whole? With Gasol going through a full practice for the first time on Monday, Conley’s rise could combine with Gasol’s reemergence for a big-time late push. Memphis is 17-19 and four games behind both an overachieving Phoenix Suns team that just lost its best player, and a Dallas Mavericks squad that has been able to avoid a seemingly annual injury to its starting lineup, for the eighth seed. Four games is not too much to overcome, and with Gasol’s defense rejoining the fray, Conley’s newfound offensive output could put the Grizzlies into their familiar “sleeper” role.

Conley could come crashing back down, regressing back to his good-but-not-great form, and the calls for the days of Lionel Hollins could return. But if Conley has really turned the corner? If he continues to take over games and push his team to wins? The Western Conference better be on alert, there could be a new elite point guard in a conference already full of them.