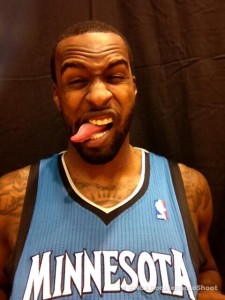 On January 13, the Minnesota Timberwolves announced the club recalled rookie guard/forward Shabazz Muhammad from the Iowa Energy of the NBA Development League. He made his D-League debut on January 7, totaling 24 points on 9-of-13 shooting, and never looked back. Ultimately, Muhammad appeared in four games for the Energy, leading Iowa to a 3-1 record while averaging 24.5 points and 9.8 rebounds per game. It was a successful, albeit brief run for Muhammad, during which he recorded a pair of double-doubles, including a 26-point, 12-rebound game against Fort Wayne on January 11.

Now, Muhammad simply getting the call doesn’t guarantee he’s in Minnesota for the long haul. In fact, during his first game on the Timberwolves bench, a January 15 loss to the Sacramento Kings, that’s exactly where Muhammad stayed. Had you purchased a good seat at Target Center, you’d have seen as much game action as the newly recalled forward. As the team’s 11th or 12th man, Muhammad’s ability to score and rebound is more or less incidental. For now, his minutes are blocked by Corey Brewer at small forward, and by the Timberwolves’ franchise player, Kevin Love, at power forward. Thereafter, Dante Cunningham, Chase Budinger, and Luc Richard Mbah a Moute are all vying for time up front.

Critics have cited Muhammad’s immaturity and perceived lack of commitment to his craft as reasons to be wary of immediate success for the former UCLA Bruin. So, regardless of whether or not he’s seeing any court time, this metered exposure to the fast and furious NBA lifestyle, even if it’s only for a short time, will hopefully do Muhammad some good. In essence, the NBA D-League exists for this very reason, especially for the teams that use it judiciously. The D-League hasn’t fully taken hold as a developmental tool by all organizations, and it has been all but ignored for the purpose of rehabbing veterans—a household practice in Major League Baseball.

The Timberwolves would be well-advised to make full use of the D-League, by letting Muhammad enjoy the best of both worlds. On one hand, he can use his time in Iowa to maximize his playing time and develop a more well-rounded game. On the other, Muhammad can be weaned from his “immaturity” by experiencing some of what the NBA has to offer, for better or worse. This is precisely the kind of slow and steady mentality that makes the D-League such a strong, albeit underutilized, developmental resource.

This is why it seems unlikely that Muhammad will remain on Minnesota’s roster for very long. Allowing a player to work on his makeup is far less of a priority than providing a player a platform to develop his basketball talents. When Muhammad returns to the D-League, something that should happen sooner rather than later, he’ll be able to get consistent minutes where he can focus on dominating opponents on the offensive end of the floor and taking the remainder of his time to more fully cultivate his untapped on-court promise.

Scouts praise Muhammad’s obvious offensive potential, especially as a scorer, even if he remains less than 100 percent confident in his jump shot. He’s also a fantastic rebounder, as evidenced by his showing in his D-League stint. Minnesota’s roster is already led by Love (also the Timberwolves’ leading scorer) and center Nikola Pekovic, two players that rebound especially well, particularly on the offensive end, so Muhammad doesn’t fill an immediate need on either front. While Muhammad also runs the floor well, there is less available evidence with which to evaluate his defensive acumen. Should he prove an adept defender, Muhammad would certainly fill a glaring need on Minnesota’s existing roster. The team’s greatest impediment to success thus far has been an inability to limit opponents’ scoring. If Muhammad were able to step in as a defensive stopper (something no scout has yet observed), his immediate outlook would seem all the brighter. For the time being, Muhammad seems destined to be spending regular time with the Energy, occasionally making his way north to the Twin Cities for some much-needed NBA seasoning.