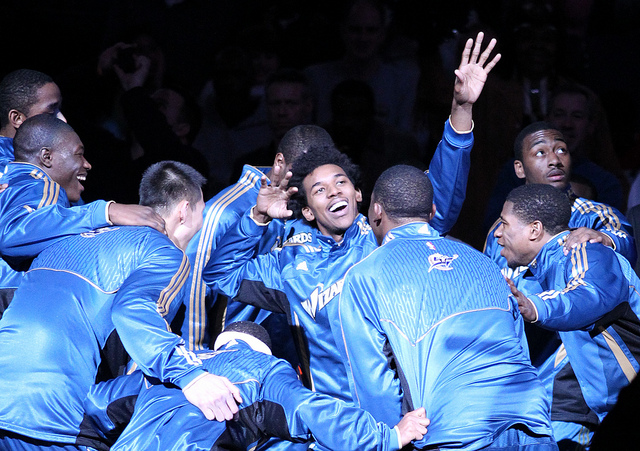 “I move too fast on the gas don’t chase me” (Clyde Carson – Slow Down) is what Nick Young shouted before receiving a floor length outlet pass from Los Angeles Lakers point guard Kendall Marshall in the second quarter of Wednesday’s game against the Phoenix Suns. He took a few dribbles thinking to himself, “they say I walk around like I’ve got an S on my chest” (50 Cent – Waddup Gangsta), and then attempted to throw down a one-handed dunk on the Phoenix Suns’ Alex Len with every intention of “slammin’ MCs like Scottie Pippen” (Notorious B.I.G. – Microphone Murderer). In accordance with big man law, especially on his home floor, Len would set a tone for any Lakers attempting to dunk on his squad, responding in kind, “chumps like you I’ve gotta keep ‘em in line, so prepare to suffer boy—’cause now you’re mine” (Gang Star – Now You’re Mine).

In what appeared to be a hard foul, Nick Young crashed to the floor to immediately pop back up with every intention of going for Len with “more beef than you can pack a fork in” (Bad Meets Evil – Fastlane) and ready to retaliate for the hard foul, shouting, “now I’m gonna have to get you kid and split your wig with a machete” (DMX – Bring Your Whole Crew). Charging after Len, the Morris twins stepped in, shoving Young back towards the baseline as if to say “you better check yourself before you wreck yourself” (Ice Cube – Check Yo Self), and although Nick Young shouted his frustration and anger towards the Phoenix squad, the Suns didn’t seem threatened or intimidated, as if to say “sly remarks, you must want to die, but you’re frontin’ why? When we all know you’re pumpkin pie” (Nas – The Black Bond).

Young retreated from the Morris twins looking like one of “those guys,” you know “the type, loud as a motorbike, but wouldn’t bust a grape in a fruit fight” (Jay Z – 99 Problems), and finally found a player similar in size only to deliver a punch that left Goran Dragic “Back handed, pimp slapped backwards and left stranded” (Dr. Dre – Xxplosive). With every attempt to “tap on jaws and lay down laws” (Mobb Deep – Hell on Earth), the punch didn’t seem to do much to Dragic or the Suns besides escalate things further. In seconds Young found himself alone, and in the event of not being backed up by any of his Lakers teammates, Swaggy P must’ve been thinking, “I met you through the homie, now you act like you don’t know me. So disappointed cause baby that sh** was so phony” (2Pac – Skandalouz), and when he did look toward the Lakers bench for a bit of defense (seeing that none was played during the actual game) the bench’s body language was clearly evident, as their tone said, “You’re all alone in this streets cousin, every man for they self in this land we be gunnin’” (Mobb Deep – Shook ones Pt. II).

Mike D’Antoni explained to Young, “You ready to bust you somebody in their head ha! You ain’t scared ha! You know how to play it ha!”(Juvenile – Ha), but as the Lakers are already devastated with injuries, losing their leading scorer off the bench due to suspension was not ideal. Truth of the matter is none of the Lakers wanted anything to do with a team fight, as they seemed “shook, because ain’t no such thing as halfway crooks” (Mobb Deep – Survival of the Fittest), and if at any point of the season the Lakers team chemistry was tested, it was now.

The Lakers ended up losing 114 to 121 and once cooler heads prevailed after the game it was appropriate for the Sixth Man of the Year candidate to think to himself: “I might be overdosed with compliments; too strung out on confidence” (Drake – Headlines), because the hard foul delivered by Len didn’t warrant his reaction. However his attention was swayed more so to his teammates that he’s defended and stood up for all season long, only to receive the opposite in return with comments that loosely resembled “they’re never around when the beef cooks, on my side of town” (Mobb Deep – Survival of the Fittest). But in the end, what transpired on Wednesday night at US Airways Center was nothing more than a “Girlfight!” (Brooke Valentine – Girlfight)