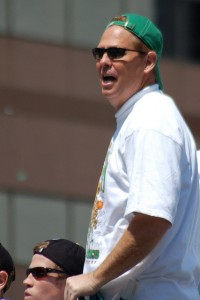 Image courtesy of Aaron Frutman/Flickr. Danny Ainge is up to his old tricks again in Boston.

The headline of NBA trades this week has to be the three team trade involving the Boston Celtics, Golden State Warriors and the Miami Heat. With the trade deadline coming to an end soon, teams in rebuild mode are looking obtain future stock while the contenders search for the last missing pieces and this trade was exactly that. Two contenders receiving the contributors they need, while the rebuilding team prepares for what lies ahead.

The Boston Celtics are clearly in rebuilding mode and have shown it by making two NBA trades in the last week or so. Danny Ainge has done a great job stockpiling draft picks for the next couple seasons while producing value in the players he has to draw more trade interest. At this point, it seems the Rajon Rondo injury has helped the Celtics by allowing young talented players show what they can do which in turn boosts their trade stock. In Rondo’s absence, both Crawford and Brooks have stepped up to the challenge and definitely drawn attention from other teams missing a final piece for their playoff run (Warriors and Heat). With Rondo back, both players were expendable in order to prepare for the rebuild process and Rondo may be the next Celtic we highlight in our NBA trades analysis. A trade involving Rondo could involve more upcoming draft picks as well as some young talented players for the Celtics. Another team that has done a phenomenal job rebuilding this season is the Phoenix Suns who have managed to not only stockpile with future draft picks, but maintain a playoff record at the same time. Look to see Ainge and the Celtics make another big splash before deadline is up for NBA trades.

The Golden State Warriors are not doing as well as they would like so far this season, but are still very much in the playoff race and will only get better as the season roles on. With this trade it will make their run much easier. A major problem the Warriors have faced is picking up the scoring slack lost from Monta Ellis. Not that they are not full of talented players, but even with the addition of Andre Iguodala it does not fill the offensive void. Jordan Crawford has shown that he can score while being a play-maker which is exactly what a team full of 3-point shooters needs. Stephon Curry is enjoying a terrific season, but having another play-maker on the team while Curry takes a break or possibly both of them on the floor together can only be good for the Warriors and make them even more fun to watch.

The Miami Heat had trouble parting ways with center Joel Anthony who played a big factor winning the last two championships with Lebron James, Dwayne Wade and Chris Bosh. With Anthony barely getting off the bench this season and his hefty contract, it was only a matter of time before NBA trades were headed his way. It was the best move for both Miami and Anthony as he will be getting significantly more playing time in Boston and Miami saved monetarily while gaining a solid backup point guard behind Mario Chalmers. Toney Douglas will be a good addition for the Heat with an opportunity to play alongside a couple of the games greatest, but if he cannot step up, playing time will be limited. The biggest part of this trade for Miami was the monetary savings from letting Anthony go.