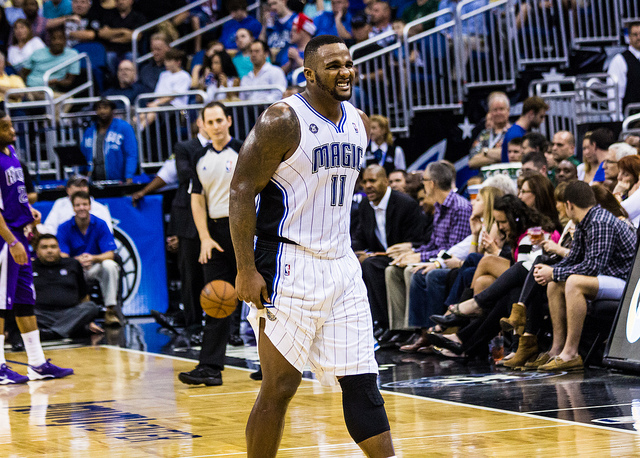 Coming in losers of 10 straight, the Orlando Magic were looking for something to go their way against the Boston Celtics on Sunday night. When the final buzzer sounded, the streak was over and the Magic were back in the W category with a hard fought 93-91 win. The meeting was the third of four between the conference foes, and the first Magic win against the Celtics since Christmas Day 2010.

Like their loss on Friday night, the Magic started slow, falling down 20-9 seemingly before you could blink. The slow start didn’t hurt the Magic too much, as they were able to cut the Celtics lead down to eight going into the second quarter. The late run was in large part due to Kyle O’Quinn bringing energy off the bench, scoring the team’s final seven points of the quarter.

Looking like a different team, the Magic came out in the second quarter with vengeance, cutting the Celtics lead down to one in two minutes. The two then seemingly traded buckets for most of the period before the Magic were able to pull away slightly. Thanks to two buckets from Arron Afflalo, and a pair of free throws from Jameer Nelson, the Magic were able to grab a seven-point lead after one.

The third quarter was a different story for the Magic, as they struggled to find any flow offensively, scoring a measly 13 points in the quarter. Boston was able to use the Magic’s struggles to their advantage, charging back into the lead thanks to a 13-4 spurt to start the quarter. The two teams looked sloppy, missing shots, turning the ball over and failing to get stops. However, the Magic’s halftime lead proved to be enough as the Magic led by two going into the deciding period of play.

The final quarter of action was much different, with each team scoring point after point any way they possibly could. The two foes shot a combined 29 free throws in the period, with each team knocking down 12 of their attempts. A pair of free throws from Tobias Harris late proved to be just enough for the Magic, as they locked down the Celtics on the defensive end not allowing them to get a shot off.

Orlando used just seven men on the night, with five of them finishing in double figures. Arron Afflalo once again led the team, tallying 20 points and a career-high tying 13 rebounds. Tobias Harris scored 18, including five in the fourth, while Glen Davis finished with 17, 11 of which came in the final period of action. Jameer Nelson notched yet another double-double, finishing with 16 points and 10 assists. Big man Kyle O’Quinn, playing for the third straight game, gave the team quality minutes off the bench, scoring 10 points and grabbing nine rebounds.

Boston collectively struggled from the field, shooting a dreadful 36.7 percent for the game. High flyer Jeff Green led them in scoring, finishing with a game-high 22 points, 13 of which came from the free-throw line. Guard Avery Bradley struggled with his shot, going 7-for-21 from the field, but was able to chip in 18 points on the night. Big man Kris Humphries, playing some of the best basketball on the team, finished with 18 points and a team-high 12 rebounds. NBA All-Star point guard Rajon Rondo, in only his second game of the season, finished the game with six points, six rebounds and four assists.

Short Rotation
Head coach Jacque Vaughn changed things up Sunday, going with just a seven-man rotation. After the game, Vaughn said he had considered going with the short rotation to “spin the bigs and smalls.” A tactic normally used closer to playoff time, helped the Magic get off their rough stretch with a much needed win. Vaughn also mentioned how the Celtics had players who would’ve, and did, present matchup problems throughout the game as to why he did it. It’s a subtle adjustment for the team, but one that they needed to grab a moral-boosting win.

Free-Throw Parade
Not only did the Magic get to the line with relative ease, they were also able to make their shots from the charity stripe. They finished the game 29-for-36 from the line, including 12-for-15 in the deciding quarter. The 36 attempts were a season high, and the most the team has attempted since March 13th, 2012, when they attempted 37 in an overtime win against the Miami Heat. Their ability to get to the line proved to be key tonight, and is a welcoming sign as the team has struggled to get there at times this season.

Halfway Mark
41 games into the season, and the Magic have a lot of unanswered questions. They’ve had stretches where they’ve looked very good, and others where they have struggled mightily. They’re a young team and they’re working on learning how to play with each other. They’re going to have their fair share of struggles throughout the season, but growing not only individually, but as a team is a huge step for the team the rest of the way. They may go through some change with the trade deadline rapidly approaching, but that’s a different discussion for a different day.

Jacque Vaughnon how nice it was to win a game the way they did…
“I think it was just great to see us kind of grind out that game from beginning to end, and be able to answer out of time outs, execution, have winning plays at the end of the game, diving on the floor, giving us opportunities to get the basketball. Just a great effort overall from the guys.”

Stat of the Night
After shooting 12-for-24 in the first quarter, the Celtics only managed to shoot 21-66 the rest of the way, a woeful 31.8 percent.