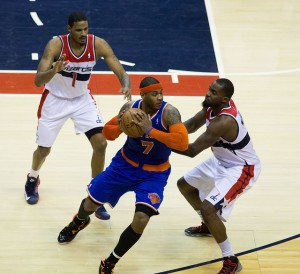 Mike Woodson does not believe comments by Tyson Chandler and Carmelo Anthony about the New York Knicks being outschemed and exploited in Monday’s 103-80 loss to Brooklyn were attacks on his coaching.

“Absolutely not,” Woodson said Tuesday. “I think when you win games things are OK. When you lose games things seem to creep in. I don’t ever air and don’t like players airing [problems]. Tyson and I, we spoke. I don’t know exactly what was actually said from Tyson, but at the end of the day I have to coach and I have to get players playing harder and smarter. That’s their job to do that.”

The Knicks dropped their fourth straight game Monday after the Nets bludgeoned them at home. After the loss — in which the Nets shot 49.3 percent from the field — Chandler questioned the team’s defensive strategy to constantly switch on pick-and-rolls.

“I think we came to play. They outschemed us,” Chandler said. “They played to our defense as far their offensive scheme, knowing our rotations and knowing what we wanted to accomplish. Kind of putting us in vulnerable situations.”

“They played to the mismatches,” Anthony said Monday. “That’s something that Jason does well, even when he was here. That was his big thing: Play to the mismatch.”

Woodson stressed Tuesday that he prefers players keeping issues within the team, but he did not criticize Chandler or Anthony for voicing their opinions. ESPN