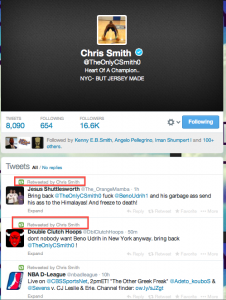 Here’s a recipe for trouble: Take a Smith brother, add some Twitter and sprinkle a dash of Knicks roster upheaval.

This time it was Chris Smith — younger brother of repeat Twitter offender J.R. Smith and currently a reserve guard for the Erie Bayhawks of the D-League after a two-minute stint with the Knicks that cost the team roughly $2.1 million — committing the social-media faux pas.

Late Monday night, Chris Smith reposted two tweets that called for him to replace Beno Udrih, who has asked the Knicks for a trade, according to ESPN.

The worse of the two retweets, which were later deleted from Smith’s timeline yet preserved via a screengrab, says of Udrih — who hails from Slovenia — “send his ass to the Himalayas! And freeze to death!”