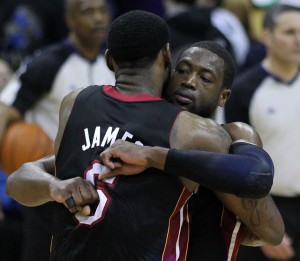 LeBron James has supported the team’s approach to periodically rest Dwyane Wade during the first half of the season. But on Tuesday, James seemed at a loss for words as he described Wade’s predicament.

“I’m not a doctor. I’m only a player, man,” James said. “I don’t know the [therapy] program he’s on. I do know that his knee, if he’s feeling good, he’s going to play. If he’s not feeling good, he doesn’t play. For me as one of the leaders on this team, I’ve got to make sure the guys that are prepared to play are ready to play. When D-Wade is ready to come back, then that’s what it is.”

The Heat have started more than a dozen different lineups this season as coach Erik Spoelstra has had to sort through injuries. Only reserve point guard Norris Cole has played in every game this season. James has missed one game with a strained groin. But there have been games when Miami has been without as many as three starters because of injuries.

Spoelstra insisted Tuesday that Wade’s recent absences are part of the training staff’s proactive approach. Wade told reporters in Atlanta on Monday that he wanted to play, but that he was instead instructed by the staff to sit out of the 121-114 loss to the Hawks.

Wade did not speak to reporters before Tuesday night’s game against Boston. ESPN

These comments come on the heels of James’ ambiguous birthday message and the trade to acquire Toney Douglas to alleviate the strain on Miami’s backcourt. Wade’s lingering knee injury might be more serious than we realize. – AL