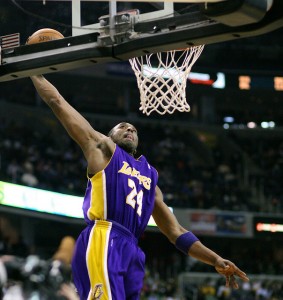 Having only played in six of the Los Angeles Lakers’ first 43 games this season, Kobe Bryant does not feel he is deserving of his starting All-Star bid and plans to sit out the Feb. 16 game in New Orleans.

“With all due respect to the fans that voted me in, I certainly appreciate that, they know how much I appreciate that, but you got to do the right thing as well,” Bryant said before the Lakers’ 109-102 loss to the Miami Heat on Thursday night. “My fans know you got to reward these young guys for the work that they’ve been putting in.”

Bryant spoke to the media just minutes after the league announced the starters for the 63rd annual All-Star Game next month. Bryant was selected to play in the 16th All-Star Game of his 18-year career, as he finished with 988,884 votes, second among Western Conference guards (Golden State’s Stephen Curry had 1,047,281) and fifth overall among all players.

“I think it’s important for them to go in and perform,” Bryant said. “They’ve been playing all season. They deserve to be in there. They deserve to play. So, I see no reason why they shouldn’t be out there doing their thing.” ESPN