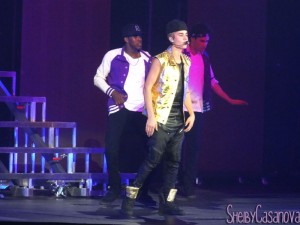 E! News had learned that after being released from jail for his DUI arrest earlier today, Biebs was expected to attend the NBA game in Miami against the Los Angeles Lakers. However, he ultimately was a no-show—apparently at the behest of the home team.

A source tells E! News Bieber’s tickets were pulled last minute by the Heat because they didn’t want the particular brand of attention that his presence would inevitably attract.

The 19-year-old pop star was drag racing in a rented Lamborghini when he was pulled over shortly after 4 a.m. on Pine Tree Drive and 26th Street in Miami Beach, Fla.

Bieber, who did not have a valid license, failed a field sobriety test and was later charged with DUI. He told a police officer that he was taking prescription medication and had also smoked marijuana. The “Somebody to Love” singer also admitted that he’d had a beer earlier that night. E! News