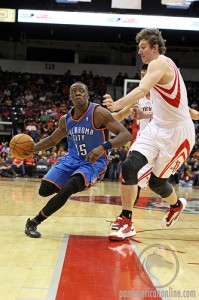 It may or may not be the team’s private view, but the Houston Rockets are now saying publicly that backup center Omer Asik will remain with the team for the duration of his contract (ending in 2015).

In a Q&A session with Houston season-ticket holders before Friday night’s 88-87 home loss to the Memphis Grizzlies, general manager Daryl Morey told the audience that Asik will likely remain a Rocket throughout his entire contract.

“We pushed to trade Omer in December,” said Morey. “We felt we had to make a fair and aggressive effort to do that. Obviously, he’d prefer to be a starter.

“At this point, Omer is very likely going to be here until the end of his contract at the end of next season, not this season. The window to trade him was [in December], and teams weren’t aggressive enough to get him, so we’re excited about him being a part of our future.” Clutch Fans