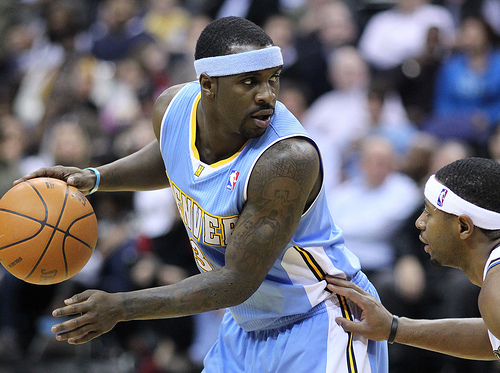 On the second night of a back-to-back, rather than with fatigue, the Denver Nuggets played with momentum in Sunday night’s game against the Sacramento Kings.

In Denver Saturday, the Nuggets managed to do what the Kings fell just short of accomplishing Friday: knocking off the Indiana Pacers. They didn’t relent the next day in Sacramento.

The Nuggets dictated the tempo, which was decidedly fast-paced. As the game wore on, Denver separated, asserting its superior comfort with the up-and-down style of play before capturing a 125-117 victory.

Turnovers plagued the Kings and fueled the Nuggets’ feverish pace. Throughout the night, Sacramento was careless with the basketball, and when players coughed it up they failed to get back in transition. The Nuggets finished with 33 fastbreak points and 22 points off of Kings turnovers.

“Everyone was worried about our offense with DeMarcus (Cousins) and Rudy (Gay) being out. I haven’t been worried about our offense once this year,” Malone said. “But they scored 58 points in our paint, they scored 28 layups on us … That team is going to score at a high rate anyway. You give them all those extra possessions and you don’t get back, it’s going to make for a night where you give up 125 points.”

Compounding matters was the Kings’ porous defense, both in transition and the halfcourt. Ty Lawson was methodical, picking and choosing when to attack. When Sacramento presented him with an opening, he struck, and he struck often.

When it wasn’t Lawson, who carved up the Kings for 27 points, it was his teammates. The Nuggets ran into little resistance in the paint, if any, and when they did draw defenders, they were adept in dropping the ball off to a cutting teammate.

Denver’s penetration, along with some Sacramento players losing their assignments, opened up the perimeter and the Nuggets cashed in, shooting 40 percent from beyond the arc on what were often uncontested attempts.

While the Nuggets experienced modest success from three, it was the lack of interior defense that sunk the Kings, Isaiah Thomas said.

“We knew coming in, the whole scout was get back on defense, get back on defense, guard the paint and it seemed like we did the opposite,” Thomas said. “We closed out too hard on their guys and gave up driving lanes. We didn’t make them beat us from the three-point line like we wanted to.”

Sunday’s game was the Kings’ second straight without Cousins and Gay – both are sidelined with injuries, and this time scoring was more evenly distributed. Against the Pacers, Marcus Thornton and Thomas were the only Kings players in double figures and combined for 80 of the team’s 111 points. Sunday, Sacramento had six players contribute double-digit scoring.

Ben McLemore led the way off of the bench, playing with an uncharacteristic aggression right out of the gate. He’s been most comfortable along the perimeter this season, running off screens and looking for catch and shoot opportunities, but Sunday McLemore attacked the basket.

For his aggression he was rewarded with six free throws, a career-high. He even played the part of playmaker on a couple occasions, finding teammates under the basket as he drew attention en route to the paint.

Sacramento will have a quick opportunity to rebound, and will look to duplicate Denver’s short-rest success when they take on the Utah Jazz in Salt Lake City tonight.