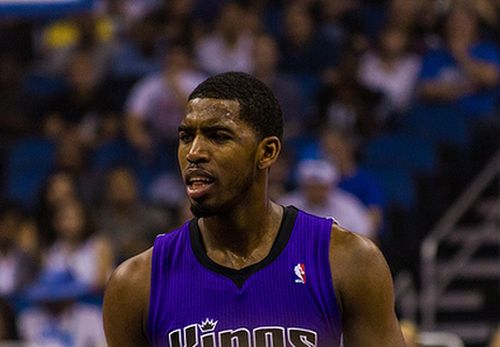 The Sacramento Kings were clearly in Salt Lake City Monday night, but they looked lost nonetheless.

Defensive rotations were sluggish, if not nonexistent, and without their top three players the Kings (15-29) fell behind the Utah Jazz (16-29) to last in the Western Conference. Extra passes and hustle helped Utah to find a 106-99 win.

The final few minutes of the game were mired by fouls and missed free throws, but not enough for the Kings to pry the victory from the Jazz.

“I don’t think I’m a big fan (favorite) of the people here in Utah,” Michael Malone said of the home crowd’s reaction to his team’s fourth-quarter tactics. “I don’t think they like my coaching style, but that’s all right.”

Monday’s game was Sacramento’s third in four nights and it was without DeMarcus Cousins and Rudy Gay once again. Cousins didn’t make the trip and Gay, listed as doubtful beforehand, watched from the sideline.

As if winning a game in the NBA wasn’t difficult enough for the Kings, it become nearly impossible when Isaiah Thomas left the game in the third quarter with stomach issues.

“Something happened at halftime. I can’t explain it, but we had no energy to start that third quarter. And then when Isaiah had to leave the game, some of our guys were like, ‘Oh, what are we going to do now,” Malone said. “It was like shellshock.”

Without their anchors, the wayward Kings struggled to slow down the Jazz. Sacramento received double-digit scoring from six players for the second night in a row, but as Malone said Sunday, scoring isn’t an issue for the Kings.

Jason Thompson and Derrick Williams filled in for Cousins and Gay with strong performances, each registering a double-double. (Thompson finished with 19 points and 11 rebounds, Williams with 17 and 15.)

Defense, however, is a different story.

Sacramento was able to hold Utah to 40 percent shooting, but you wouldn’t be able to tell by the way players lost their assignments while rotating. Time and time again the Jazz was able to find good looks at the basket simply by making the extra pass to find whichever teammate the Kings had forgotten about.

Without Cousins, the Jazz forced the Kings to play a smaller lineup that featured Travis Outlaw at power forward for most of the night. Outlaw put up 10 points, but shot 3-9 and relied on fadeaway turnaround jumpers at times.

Malone expects Gay to re-enter the Kings’ lineup when they take on the Memphis Grizzlies Wednesday.

“I was planning on starting Rudy, but with the late scratch – we didn’t find out, really, until right before the game – so I figured we’d put Travis Outlaw out there,” Malone said. “But hopefully Wednesday we’ll be healthy enough where we can get our normal starting lineup back.”