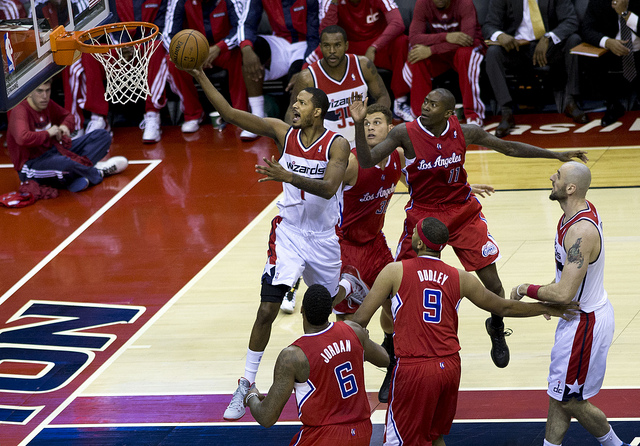 Until recently, the apex of Trevor Ariza’s career was commonly considered to have come and gone between the months of March and June of 2009. It was in that short time that Ariza capitalized on a newfound* starting spot in the Los Angeles Lakers rotation and, in the span of 23 playoff games, asserted himself as a progenitor of the so-called “3 & D” movement, wherein rangy, athletic wings earn their bread shutting down elite scorers on one end and supplying lethal long-range shooting on the other.

Trevor Ariza performed his duties admirably during the Lakers’ ’09 championship run, shooting a scorching 47 percent from three on nearly four attempts per game and pestering scorers like Carmelo Anthony and Rashard Lewis to great effect. So impressive was Ariza, in fact, that the Houston Rockets—consigned to a mournful rebuild following Yao Ming’s medical retirement—inked Ariza that July to a five-year contract worth $33 million. Expectations for his continued growth hung conspicuously above the deal; the Rockets saw the 23-year-old Ariza as a building block for their new era.

Unfortunately for Houston, the burden they laid upon Ariza outstripped his talents. He was best utilized in the fashion the Lakers had pioneered, not as the focal point of an offense. The Rockets quickly discovered that asking Ariza to create his own offense was synonymous with requesting contested twenty-footers off the dribble, a strategy less conducive to winning than sighs of frustration. Rockets management acted swiftly on their soured investment and shipped Ariza to the New Orleans Hornets in a five-player deal just one year into the experiment.

Though the Hornets achieved some success with Ariza during the 2010 season (46-36 record, first round exit), their achievements were more a product of Chris Paul’s herculean efforts and David West’s efficacy in the pick-and-pop than anything Ariza brought to the table. Trevor kicked in 11.0 points and 5.4 rebounds per game while playing 34.7 minutes per game and shooting 30 percent from three, about five-percentage points below the league average. Essentially, at a time when some executives figured he would be peaking, Ariza had leveled off into a slightly below-average starter for a middling franchise.

So it was that, as 2010 came to a close, Trevor Ariza—seven years into his career and with three years remaining on an albatross contract—looked ready to be consigned to the dust heap of mediocrity.

Over the next two seasons this judgment rang true, as Ariza submitted one more blah campaign for New Orleans before being traded again, this time to the Washington Wizards for a rundown Rashard Lewis and a second round draft pick. The move amounted to a salary dump for the Hornets, who bought out Lewis’ contract ten days after the deal went through.

Washington’s 2012-13 season unfolded in similarly ignominious fashion for Ariza, as he lost the battle for his starting spot to Martell Webster early on and saw his numbers decline alongside his minutes. After being sidelined with a knee injury, Ariza managed to return after the All-Star break with a little more pluck, hitting treys at a red hot 42 percent clip and distributing the ball reasonably well for his position—but the Wizards still finished a paltry 29-53 on the year.

Since leaving Los Angeles, Ariza’s fortunes have tended to mirror those of his teams’, always hovering somewhere between ho-hum and poor without much hope for improvement.

Happily, this year that trend has so far been bucked. The Wizards are 21-22, fifth in the Eastern Conference standings, and Ariza has played no small part in their success. After regaining his starting spot last off-season, he has played in every game for Washington thus far and is posting career numbers. Ariza’s 14.2 points per game registers as the second highest average of his career (behind only his shot-happy days in Houston), but what is truly impressive is the unprecedented efficiency with which he is scoring. Ariza has pulled his shooting percentage up to 44 percent overall, his best figure since 2009**, and most importantly, has managed to sustain a scorching 40 percent pace from deep, a career high. This is doubly impressive when you consider the fact that compared to last year, his shot volume has increased 27 percent and he is launching 2.2 more triples per game (per Basketball-Reference).

Ariza is also averaging career highs in rebounds (6.0 per game) and steals (1.9) for the Wizards, confirming the eye-test supposition that his activity on defense has picked up appreciably. He’s showing a competitive zeal that has been conspicuously absent from his game in recent years, and it’s paying dividends even when his shot isn’t falling.

For example, against the Detroit Pistons on January 18th, Ariza shot just 1-for-7 from the field, but compensated by snaring eight rebounds and dishing out seven assists. Those contributions paired nicely with the three steals he nabbed as well. Through his last ten games Ariza has averaged 14.0 points, 7.0 rebounds, 3.6 assists and 2.2 steals per game, proving himself a jack-of-all-trades; the exact sort of presence Washington needs to round out its rotation.

Ariza has finally rediscovered his ideal role as an overqualified fourth option—a revelation that has permitted him to relax and play within himself, tapping into the rhythm of the game instead of forcing things. He is an opportunist better suited to capitalizing on defensive lapses and inattentiveness than breaking down a defense on his own, and this year in DC, he’s found a niche that allows him to eschew ball-dominant play and focus on his strengths.

So What Does it all Mean?

John Wall is obviously the engine of the Wizards, and Bradley Beal, finally unfettered by injury, has taken encouraging steps forward this season, but it’s becoming rapidly apparent that Trevor Ariza’s continued production will be a key variable in determining Washington’s success as they build toward a playoff push. His well-rounded game and efficient use of possessions make him a vital cog whose contributions cannot be replicated by any other player on the roster. If Ariza keeps up this standard of play, it’s safe to say he may well receive another healthy payday. After all, that five-year deal from Houston expires in June.

Ariza’s resurrection is a great story; he has earned the right to thumb his nose at the doubters. Moreover, his story is a prudent reminder of the importance of circumstance, and how we as media and fans are hasty to construct narratives that are not necessarily true. Here’s to proving us wrong, Trevor. Keep up the good work.

*After beginning the 2008-09 season in a reserve role, Ariza was the recipient of Luke Walton’s remarkable beneficence that year, as Walton—who himself had usurped Vladamir Radmonavic’s starting spot early in the campaign—implored Phil Jackson to insert Ariza in his place with 20 games to go.