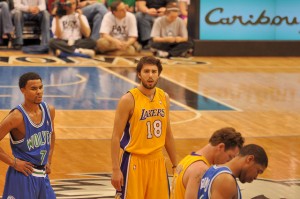 The Los Angeles Clippers have signed 29-year-old guard and former first-round (27th overall) pick Sasha Vujacic to a 10-day contract, and he will be available in tonight’s matchup against the Denver Nuggets, wearing number 18. Vujacic won two championships with the Los Angeles Lakers in 2009 and 2010.

Vujacic last appeared in the NBA in the 2010-11 season, when he played 11 games for the Lakers before being traded to the New Jersey Nets in a three-team deal that sent Terrence Williams to the Houston Rockets and veteran forward Joe Smith to the Lakers. Vujacic appeared in 56 games with the Nets, starting in 17 contests in which he averaged 25 minutes and 10 points, three rebounds with two assists.

Originally from Maribor, Slovenia, Sasha last played for Turkish Euroleague team Andalu Efes Istanbul in 2012-13, where he averaged 9 points per game while shooting 38 percent from the field, similar to his career 39.5 percent field-goal average in the NBA.

For a team that’s averaging 34.6 percent from three and loaded with depth at the wing position, this 10-day deal is a bit of a head scratcher, especially for a squad that is in more need of an additional big man to play bench minutes alongside Blake Griffin or DeAndre Jordan.

I can only think of a few reasons the Clippers would look to add Vujacic at this point:

1. As there have been reports of Darren Collison favoring a bruised toe, Vujacic could relieve Collison of at least 10 minutes a game leading into the All-Star break, in the hopes that the Clippers will receive a healthy Chris Paul and Collison once regular season play commences.

2. The Clippers are entertaining the possibility of packaging Jared Dudley in a trade for a big-man. Dudley has been the odd man out in the rotation this season and has been less than stellar, with an inability to consistently knock down open jump shots.

3. The Clippers are looking to keep Chris Paul sidelined until after the All-Star break. Adding another player into the wing rotation for a few weeks adds depth, which in turn creates less of a need to rush their All-Star point guard back into play. With the way they’ve been playing lately, a healthy Clippers team post All-Star break is dangerous.

However you try to rationalize the move, similar to recently added Clippers forward Hedo Turkoglu, Vujacic hasn’t played in the NBA in more than a year, and if there’s no plan set in stone for the sharpshooter from behind the line, at the very least he’ll serve as an extra body before the return of Chris Paul.