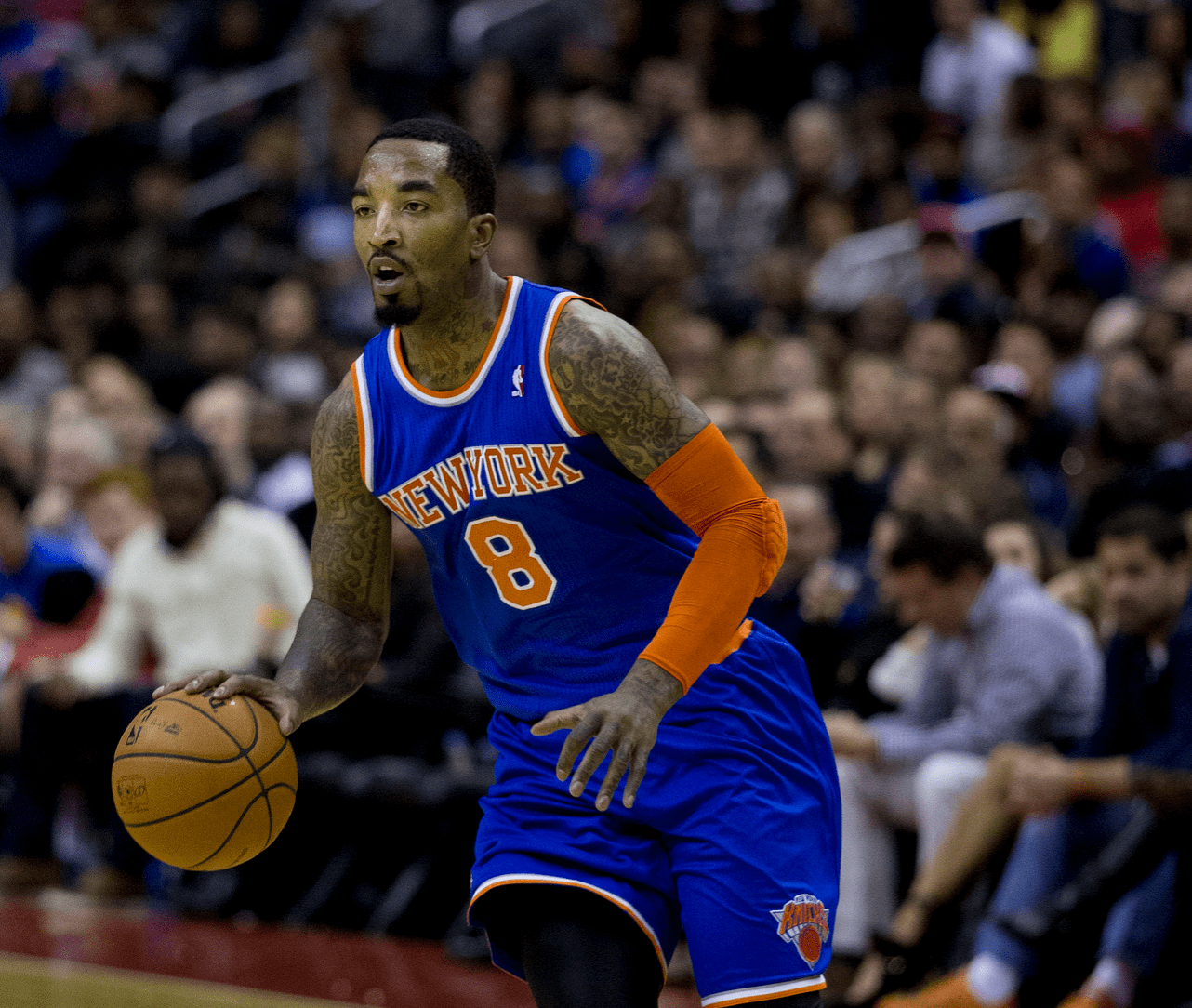 J.R. Smith was born Earl Smith III, but if headlines are to be believed his real first name may actually be something closer to “The Mercurial,” or “The Tumultuous.”

The oft perplexing but never boring J.R. Smith has carved out a career of contradictions. He is an otherworldly athletic talent who can at times do everything—and who at times might do anything—on a basketball court. Whether good or bad, amazing or mind-numbing, head-scratching or awe-inspiring, J.R. Smith has provided plenty of crazy moments both on and off the court in his 10 years in the NBA.

When I first heard of the recent incident involving the untying of shoelaces I had two thoughts:

1. I can’t believe J.R. Smith would get caught doing something like that! Doesn’t he know people are watching this? I’ve even heard sometimes these games are recorded and broadcast nationally.

2. Of course J.R. Smith would do something like this! This is exactly the kind of random boneheaded thing that gets in the way of him being a really good basketball player.

In a way, almost every memorable event in Smith’s career is accompanied with this kind of dichotomy. I recall a George Karl quote after a playoff game in 2007 in which the coach put Smith in the game in the final minutes as it was slipping away and he proceeded to hoist two questionable three-pointers.

“I just love having the dignity of the game being insulted right in front of me,” Karl said.

Again I had two opposing thoughts:

1. Those shots were ridiculous. One was from about 50 feet away and the team has both Carmelo Anthony and Allen Iverson on it. In a playoff game, tensions are high and the tolerance for J.R. Smith’s frustrating ways would likely drop to zero for just about anyone.

2. But what did George Karl put J.R. Smith in the game for if not the hope that he might be able to shoot them back into it with ridiculous shots? That was pretty much the only hope at that point.

Those shots and the benching that ensued are but a few examples of the history of craziness that has been the career of J.R. Smith. I’m leaving out the ugly moments for now (nothing here about legal issues or anything too serious) but it seems only fitting to share both the good and bad sides of the crazy coin that is J.R. Smith. So I present a brief history of the amazing moments in J.R. history. Amazing in all senses of the word.

J.R. Smith was drafted by the New Orleans Hornets with the 18th pick in the 2004 draft straight out of high school. Starting the narrative early, he would be Western Conference Rookie of the Month in three consecutive months (January, February, and March of 2005) but would of course clash with head coach Byron Scott over playing time and his role, not to mention all the losing.

In his second season, Smith and Scott would go months without speaking to each other and when he was benched even while the Hornets roster was depleted from injures, he publicly called out his coach’s “ego” and demanded a trade.

The Hornets accommodated, sending him and P.J. Brown to the Chicago Bulls for Tyson Chandler. Then the Bulls sent Smith to the Denver Nuggets for Howard Eisley (seriously) and two second-round picks. Yes, in one off season J.R. Smith was traded for both Tyson Chandler and Howard Eisley, which is a pretty good indication of what his range of value might be on any given night.

After being asked what he had learned about coaches during this time Smith famously quipped, “Just play your game, because you’ll probably be around a lot longer than they will.”

When he first arrived in Denver he was undoubtedly raw and occasionally immature, but the mood surrounding the impulsive young guard could only be described as excitement. He would soar through the air for majestic dunks and occasionally get so hot from three that it seemed like everything he chucked up would go in. And then December 16th, 2006 happened and everything changed.

There is plenty of evidence to suggest that Smith has always been a handful, but when he became the centerpiece of an infamous brawl against the New York Knicks in Madison Square Garden, he became nationally known as a wild card who was as likely to help his team as hurt it, either with his play or with his emotions.

He didn’t initially respond much differently than anyone would have after being essentially clothes-lined by Mardy Collins, but things escalated when Carmelo Anthony came to his defense like someone had attacked his kid brother. When Smith tackled Collins into the front row, the league was hit with “Malice at the Palace” flashbacks and he was suspended for 10 games. Anthony was suspended for 15. The Nuggets brass traded for Allen Iverson during the suspensions and the Nuggets were never the same again.

It’s kind of crazy to think how different history might look had Smith’s emotions not gotten the best of him in that moment. Moments are fleeting, consequences are forever.

It could be argued that those suspensions cost the Nuggets a few spots in the Western Conference race and were somewhat responsible for them drawing an unfortunate first-round opponent in the San Antonio Spurs. The Spurs would go on to destroy those playoffs and win the NBA championship after sweeping the Cleveland Cavaliers.

J.R. Smith made zero three-pointers in the first four games of that series, culminating in the shots that insulted the dignity of the game and caused George Karl to bench him saying, “He’s done.”

The next few years would be punctuated by troubles off the court that would translate to some missed time and inconsistency on the court. It became routine for Denver area sports writers to have annual, or even bi-annual, articles with headlines in the “Is this is year/time J.R. will keep it all together?” range. Each time, the answer was, “not for very long.”

He would lose his temper during games, take bad shots, sit on the end of the bench and pout, but as soon as you lost hope he did something like this:

There simply aren’t a lot of people in the world who can do that. Smith would play mostly well in his final years in Denver. He shot 45.4 percent in the playoffs when the Nuggets marched to the Western Conference Finals ultimately to fall short to the Los Angeles Lakers, either because of a bunch of complicated basketball reasons or because of two terrible inbound passes.

He was a prolific sixth man in the next year-and-a-half and gave us this gem:

Although his play remained erratic—he was and is the quintessential “can shoot you into or out of a game” player—Smith seemed to have calmed his demeanor. But no fear blogosphere, a trade to the city that never sleeps was in order! The “Melodrama” that sent one of the game’s stars to the New York Knicks also saw his adopted kid brother come along and a whole new layer of craziness was unleashed from deep within.

For people who are into such things—and I’ll admit to having this bone in my body—the most underrated aspect of J.R. Smith’s arrival in New York was the resurrection of his Twitter account.

Smith tweets for such diverse purposes as inviting random New Yorkers out to a bike ride in Central Park at 2:00 AM to clowning on Kris Humphries for his Kardashian connections to challenging Kobe Bryant at basketball to sharing images of the shapely behind of a significant other who would significantly consider other options after the next time she checked Twitter.

Winter came early in 2011 when the NBA locked out the players. Because he can’t sit still, or because he loves the game of basketball (or both), Smith decided to sign with a Chinese team, the Zhejiand Golden Bulls.

Not wanting to be an enigma in only New Orleans, Denver, and New York, Smith spread the love to China. He ended up suing his team when they reportedly withheld over a $1 million because, as they claimed, he missed over 80 practices. With no Chinese George Karl to staple him to it, Smith finally came off the bench in one game and scored 60 points in true J.R. fashion. And we were talkin’ ’bout practice?

Oh, and there was also the story about Smith’s sister getting into a fight with some Chinese basketball fans allegedly because she didn’t like the way they were treating her brother.

After completing a trip to the Far East that would be forgettable if it weren’t so memorable (seriously though, what did anyone accomplish there?) Earl returned to the United States and, despite the odd Twitter behavior, he was a real plus for the Knicks. They were bounced in the first round by the Miami Heat, but not before Smith could deliver this bit of eye-candy in the series:

The next season he dazzled again with plays like this:

But he also added clutch to his repertoire, stepping up big when Carmelo Anthony and Raymond Felton were lost to injury, hitting game-winning shots against the Charlotte Bobcats and Phoenix Suns as well as being instrumental late in a big win over the Oklahoma City Thunder.

It seemed (at the time) like Mike Woodson may just be the one guy who could coach J.R. His play elevated enough to earn him the Sixth Man of the Year Award in 2013. He was producing at an all-time high and the Knicks were rolling in the first round of the playoffs against the Boston Celtics.

And then, because it had just been quite long enough, in Game 4, Bizarro Smith reared his head again. Or more accurately, he reared his elbow right into Jason Terry‘s face. Smith would be suspended for the rest of the first round and would be an absolute wreck on the court once he returned against the Indiana Pacers.

As soon as basketball writers throughout the land were finally ready to dust off those typewriters for the ultimate “No seriously … this time J.R. has figured it out!” piece, he derailed the team’s playoff hopes in one swift moment. I honestly thought the punishment was a bit harsh considering what other players were doing without suspension in the same playoffs (Andrew Bogut!) but when you are The Mercurial J.R. Smith, you have to know better than that.

After that situation spiraled out of control and the Knicks were dismissed from the playoffs, J.R. apparently needed to relax and ended up with a suspension for pot use to start this season.

Another delayed start to a season due to suspension led to another stretch of bad basketball which led to … the untying of shoes?

In January of 2014, J.R. Smith attempted to untie the shoe of an opposing player twice!

And then just a few days after Andrea Bargnani provided the perfect learning example of what not to do at the end of a game, Smith paid homage and one-upped Bargnani by taking this absurd shot:

The 2013-14 season was looking more and more like a lost cause for J.R. Smith, as after the shoelace incidents he had a falling out with Mike Woodson, because he is apparently checking off a list of some kind. Whether or not J.R. will respond well to his most recent benching remains to be seen, but he has put up a few nice games since.

Just this week, he welcomed first overall pick Anthony Bennett to the NBA:

As soon as we are all convinced he is headed in one direction or another, J.R. Smith finds some new and interesting way to throw the whole thing out of whack. We don’t know what he will do next but we know it won’t be boring.

J.R. Smith is a lot of things, but he is not boring.