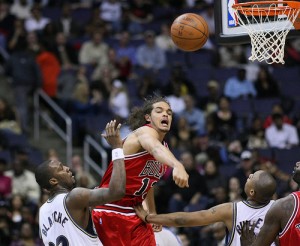 It’s been a rough year for the Chicago Bulls. They lost Derrick Rose for the season, traded away All-Star Luol Deng to the Cleveland Cavaliers, and are plagued with injuries in general. There are bad days, bad weeks, and bad seasons. However, there is always something good that shines throughout those dark times. Center Joakim Noah is one of those good things for the Bulls.

Noah has recently been named as an NBA All-Star reserve, and this will be his second straight NBA All-Star appearance. Simply put, the man absolutely deserves every bit of the honor. Throughout the ups and downs of the Bulls this season, as well as in every other season, his blue-collar work ethic and tremendous heart have always been on display. Hustle and talent are two big factors in playing any sport, and it just so happens that Noah is a talented hustler.

The Chicago Bulls lost an amazing player in Deng, which started the remodeling process, but if you thought that the team was going to tank, that’s definitely not the case. Noah has been leading the pack, and picking up the slack for the Bulls more so than usual. With his tremendous hustle, and intense defensive mindset, Noah is one of the best centers in the league and the Bulls benefit greatly because of the guy with the tornado jump shot.

In the month of January, Noah put up averages of 13.6 points, 14.1 rebounds, and 5.8 assists per game. He ranks at number seven overall in rebounds per game in the league, grabbing 11.5 boards per contest. His rebounding prowess in the month of January was fantastic, and reminded many of a former Bull that was very successful on the glass as well. Through Noah’s incredible play, the Bulls went 11-4 in January, and hold the sixth spot in the Eastern Conference. Noah is one of the significant reasons as to why the Bulls are still relevant in the East. He’s always been one of the leaders of the Bulls, but now he’s the head honcho for the team for the remainder of this season, and he’ll definitely evolve as a player a little more because of it.

Everyone knows that Noah is a defense-first kind of guy, but that doesn’t mean he can’t shoot the ball. He’s stepped up his offensive game since Deng’s departure, and contributed in the increase in the Bulls’ overall points per game. Prior to Deng being traded, the Bulls were averaging 91.3 points per game, but they’ve boosted that average to 97.9 points. He’s also boosted the dimes he’s been dishing as well, helping the Bulls average go up from 21.4 assists per game to 24.5 assists since Deng’s trade. In fact, Noah leads all NBA centers in assists per game. On top of that, he helps greatly in anchoring the Bulls defense to hold opponents to 92.8 points per game, which is the second-best mark in the league.

“As a team, in general, I think we’re making quicker decisions, which is good. And Jo is a big part of that because the ball goes through him so much. When he makes those quick decisions, we can get layups, we can get good balance,” Bulls Coach Tom Thibodeau told the Chicago Sun Times.

He’s definitely come a long way from being the guy to provide an energy boost for the team. Noah still provides that spark and intensity, but his game has evolved nicely since he’s entered the league. He’s a complete player, and a worthy center for any team to have. More so, he has the attitude of a winner. Noah, above anything else, wants to win. He’s not thinking about the potential to win next season, when Rose comes back and the Bulls have a better chance, he’s thinking about the wins he can help the team get right now. He lives in the moment, a mindset that’s hard to get into in world where most people have so much concern about the future all the time.

When he was asked about his style of play, Noah told ESPN: “I’m just trying to win ball games, man, that’s all.”

Sure, the Eastern Conference is terrible right now, but you can’t take away what Joakim Noah has done. Even though the Bulls have a small chance of making it deep into the playoffs, if they make it at all, a player like Noah that plays like he’s going for the gold all the time is a blessing.