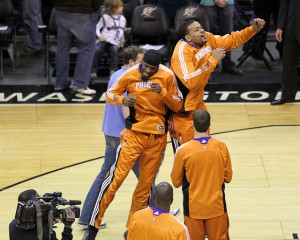 This was supposed to be a rebuilding year for the Phoenix Suns. With first-year head coach Jeff Hornacek, a raw rookie in fifth overall pick Alex Len, and a rotation featuring guys like Ish Smith, P.J. Tucker and Dionte Christmas, expectations were understandably minimal.

Phoenix spent the summer loading up on assets, presumably with an eye on the future. The Suns positioned themselves to have at least two and possibly three first-round draft picks in June’s talent-filled draft. Add to that the expiring contract of Emeka Okafor, not to mention the always-beautiful Phoenix weather and budding superstar Eric Bledsoe, and the Suns looked like a potential breakout team for the 2014-15 campaign.

Then a funny thing happened. Eric Bledsoe thrust himself into the national spotlight by leading the Suns to 16-8 record while filling up the stat sheet with 18 points, 4 rebounds and 6 assists a night. Led by Bledsoe and second year big Miles Plumlee (10 points and just under nine rebounds a game), the Suns caught fire. At one point in December, the team, who many experts believed would challenge for a top three pick in the draft, rattled off five wins in a row and eight of nine. So much for that rebuilding year….

As the season progressed into the new year, Phoenix’s chances of continued success took a seemingly drastic turn for the worst. Eric Bledsoe suffered a knee injury that would require surgery. His status for the remainder of the season remains in limbo. Many believed that with the extended absence of Bledsoe, the Suns would struggle and turn back into a lottery team. Since the injury to Bledsoe, Phoenix has continued to surprise. The Suns have gone 9-7 in the guard’s absence, yet doubts remain.

Under the tutelage of Hornacek, the Suns have played an exciting and competitive brand of basketball. Their 105 points per game is sixth best in the league. As great a story as these desert dynamos have been, those who follow the game closely realize that without a legitimate superstar (or two or three), Phoenix is far from championship material.

So where do they go from here? Most fans would say the best move for the team would be to pull back the reins, play the young guys, absorb some losses and position yourself to have the most ping pong balls come June.

With the “tanking” question now in full debate, I have a simple question to ask those involved: “Would you rather be the Indiana Pacers or the Cleveland Cavaliers”?

Case in point: The Cavaliers have spent the better part of three plus seasons “tanking” for lottery selections and cap room. And how’s that working out for them? Sure the Wine and Gold were able to snatch up two-time All-Star Kyrie Irving with the first pick in the 2011 draft. But Irving has as many postseason appearances as I do. Instead of pairing Irving with veteran talent, Cleveland has relied on lottery picks Tristan Thompson, Dion Waiters and the shockingly inefficient Anthony Bennett. The result has been a team that can’t even sniff .500. Oh, by the way, in case you forgot, Bennett was the first overall pick in the 2013 NBA Draft. There are no sure things.

Meanwhile, the Indiana Pacers haven’t drafted higher than 10th overall since 1989! Yet they’ve turned mid-to-late first-round selections into former All-Star Danny Granger and current All-Star Paul George. Add to the mix this season’s breakout performer Lance Stephenson (a 2010 second-round selection) and it becomes more apparent that sometimes the cream of the draft doesn’t always rise to the top. Indiana has been to the playoffs three straight seasons and currently sits atop the Eastern Conference standings with a 35-10 record. No tanking required.

An easy argument to make for Suns fans itching for the team to tank in an effort to land Andrew Wiggins, Jabari Parker, Joel Embiid or the next big thing, is that Cleveland drafted poorly and the Suns won’t make that same mistake.

Easier said than done. There are no sure things. See Bowie, Sam; and Oden, Greg. If the Suns choose to pump the breaks on their playoff push, they have no guarantee of landing a superstar or even an All-Star. There’s that whole ping pong ball mess that could actually reward the 14th-worst team with the first pick. Since the current weighted lottery system began in 1990, only three teams with the NBA’s worst record have won the lottery.

Even if you are lucky enough to win the lottery, success is far from guaranteed. Aside from the above mentioned Bowie, Oden, and Bennett, here’s some other former No. 1 picks: Pervis Ellison, Michael Olowokandi, Kwame Brown, Andrea Bargnani.

This again brings me to the Indiana Pacers model of success. The team has an abundance of playoff experience thanks in large part to a front office that has avoided the tanking trend and continued to build a winning culture. Indiana has proven that you do not need to sacrifice a playoff push for a successful future. They’ve also proved that good players can be found outside of the draft’s top five selections. It’s safe to say that Indiana has put that whole “small market teams can’t consistently win ” thing to rest. Suns fans, ask yourself again: Would you rather be the Indiana Pacers or the Cleveland Cavaliers?

With the NBA season approaching the All-Star break and the Phoenix Suns occupying sixth place in the Western Conference playoff race (10 games above .500), it should be pretty clear that Phoenix should stay the course (with or without Bledsoe), gain valuable playoff experience and use this season’s success to build on next season’s potential. Remember, nothing is guaranteed. The future is now in the Valley of the Sun.