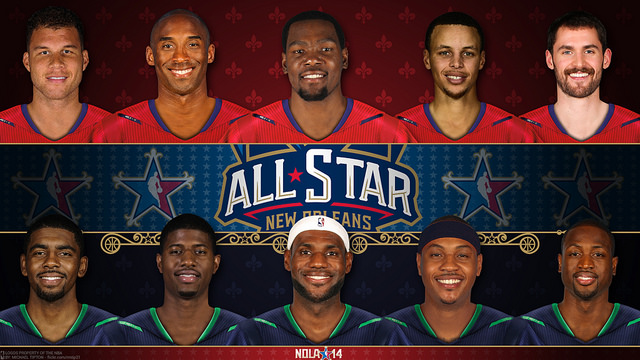 The 2014 NBA All-Star Game is still weeks away, but that doesn’t mean we haven’t already started obsessing over it.

Here are 10 things to watch for on game night.

The LeBron James-Kevin Durant comparisons have gone into overdrive this season and rightfully so. For the first time in his career, Kevin Durant is putting up numbers that legitimately rival the King’s. LeBron’s made no secret of the fact that he checks KD’s stats on a nightly basis, so expect these two to go one-on-one for a Gatorade commercial-worthy stretch come February 16.

With few exceptions, the MVP of the All-Star Game has gone on to have a Hall Of Fame career. An award-winning performance from one of the young guys could be a sign of even greater things to come. Then again, it might just mean that we’ve found the next Randy Smith.

3. Wilt’s Scoring Record on the Line

Carmelo Anthony, Kevin Durant and even Terrence Ross have had some impressive scoring nights this season, but topping Wilt would be a truly memorable accomplishment. Chamberlain holds the record with 42 points in a contest, also grabbing 24 rebounds. More to the point, Wilt set his mark in 37 minutes, which you have to assume would be enough time for a sharpshooter (Stephen Curry?) to top him. Go out there and score some points, everyone.

4. Two All-Star Centers: A Sign Of Things to Come?

Stretch 4 is the new 4, and accordingly, only three centers, Roy Hibbert, Joakim Noah and 6’11”-can’t-post-up-but-I-swear-I’m-a-center-seriously-have-you-seen-my-free-throw-percentage Dwight Howard are on the All-Star rosters. I imagine Marc Gasol might have something to say about the so-called demise of the true center, but like it or not, this game is a preview of what’s to come over the next several years. If that means more players like Anthony Davis, I’m all for it.

5. Will Lance Stephenson Find His Way In?

Lance has made his feelings regarding his All-Star snub quite clear, declaring that he plans to “kill everybody who is in front of me.” I’m on Lance’s side, and not just because I’m terrified of him. The league leader in triple-doubles has had a breakout season for a title contender, proving beyond argument that he is among the league’s best. If Lance does manage to get into the game somehow, look out.

6. Will Joe Johnson Prove He Deserves To Be There?

Joe Johnson took some pretty pointed criticism from the folks over at ESPN, who allege that while Johnson is still an above average player, he has not played at an All-Star level this season. I’m tempted to agree with them, but I also would not be surprised in the least if Joe Jesus goes off in NOLA and shuts us all up.

7. Kobe’s Spot Up For Grabs

The West is already loaded up at the guard spots, so the smart money is on them adding either Anthony Davis or DeMarcus Cousins to the roster. Our own Steven Covella has a piece on why Cousins won’t be added, and I have my own piece on why Anthony Davis will: He’s better at basketball and people like him more.

Hopefully this game will mark the end of the sleeved jersey. They’re ugly, shooters hate them, and they seem to exist solely for the purpose of making the league money. I’m all for avoiding future labor disputes through new revenue streams, but couldn’t you guys just do a bake sale instead? I would buy Rice Krispie treats from Cole Aldrich in a second.

9. Will The Ratings Affect Future Games?

2013’s ratings saw a 13 percent spike from the previous season, so this conversation might not even be worth having, but still, you have to wonder how Adam Silver would respond to a bust in his first All-Star Game as commissioner. Worst case scenario, they completely overthink it and it becomes the Pro Bowl. Best case, they add a three-on-three tournament and one-onone games.

The mascot death match is new to the All-Star Game this year, and while I find bloodshed enjoyable, I also wonder whether it has a place in today’s game. If you haven’t already, get online and vote now for who you think will win this savage battle to the death. My money’s on Rumble the Oklahoma City Bison, who will be competing with a spear gun.