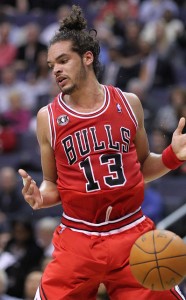 Joakim Noah wasn’t sure if he was going to hear from the league office Tuesday, but he figured he’d at least try and be proactive before a possible fine or suspension heads his way.

After picking up a second technical foul and being ejected in the third quarter of a 99-70 loss to Sacramento, Noah pointed at each of the three referees and dropped an “[expletive] you,’’ on each of them, before his teammates restrained him and he was led off the court.

“I’m really disappointed,’’ Noah said after the game. “I shouldn’t have acted that way. I apologize, I’m sorry to all three referees out there. They’re out there trying to do their jobs and I should never have said the things that I said. I hope they accept my apology and I hope I can move on from this.’’

Noah was asked what led up to his outburst, and again took responsibility.

The Kings were called for two more fouls than the Bulls so Noah was probably not complaining about that. Chicago had a -23 disadvantage on the boards and shot just 28.2 % from the field against one of the worst defenses in the league, including a season-low 12 points in the first quarter. I would be pretty pissed off too if I were getting my tail handed to me like that. – AL