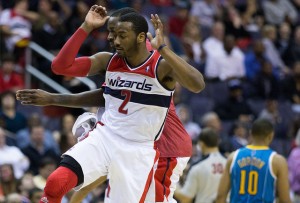 The Washington Wizards celebrated what they hope is the end of mediocrity Monday night, moving above .500 for the first time in more than four years with a 100-90 win over the Portland Trail Blazers.

“It’s only one game over, but, yeah, it’s a big relief,” said Wall, who has endured more than his share of Wizards frustration since his selection as the No. 1 overall pick in the 2010 draft. “But the main thing is we’ve got bigger goals to try to keep winning games and try to keep getting better and try not to go back down — so we won’t have to have this talk again.”

Wall scored 22 points, and Trevor Ariza added 20 and had another solid defensive game for the Wizards, who hadn’t had a winning record since beating the New Jersey Nets to improve to 2-1 on Halloween in 2009. Washington committed six turnovers while forcing 16 from Portland, and Wall and Co. didn’t look back after Kevin Seraphin led a 12-0 run that put the Wizards up by 17 early in the fourth quarter.

“It’s great to finally get this team over the hump,” Beal said.

No one on the current Wizards roster was on the team when it was last above .500. They had lost this season at 0-0, 9-9, 14-14, 19-19, 20-20, 21-21 and 22-22, and the hurdle became such a bugaboo that players starting declaring the subject taboo when reporters asked about it. Coach Randy Wittman at one point cautioned against thoughts that “all of a sudden fairy dust is going to fall on us if we get over .500.” Associated Press

The Wizards have no chance at the no.2 or no.3 seed in the East. Miami is in their division and the winner of the Atlantic Division winner is guaranteed the third spot in the Eastern Conference. That said, the Wizards are just one and a half games out of the fourth seed which would allow the franchise to have home-court advantage for the first time in over two decades. This win also marks the first time that John Wall has been above .500 in his entire career.

I recommend listening to the Tony Kornheiser podcast for a local, zany take on this benchmark in the Wizards’ season. – AL