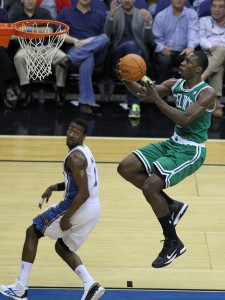 For Jeff Green, flashes of brilliance have heretofore obfuscated the fact that he is a fitfully inconsistent player. Let this pretense stand no more. Green is no superstar in training, no “guy with all the tools,” and not “one step from figuring it all out.” He is a 27-year-old, mid-tier forward who, when given the minutes, is capable of producing a mid-teens scoring average with reasonable efficiency. Nothing more.

His advocates will point to a handful of remarkable outbursts—like the 43-point performance he submitted against the Miami Heat on March 18th of last year—as evidence for Green being on the cusp of stardom. This argument conveniently omits any reference to the frequent stretches of dismal irrelevance that represent a far larger cross section of Jeff’s on-court performance. For evidence of this, look at his numbers over the last five games:

Too often Green hovers tentatively off the ball, bouncing gamely from foot to foot in the corner while remaining painfully uninvolved. He doesn’t demand touches and has little say in dictating the flow of the game. He is a drifter, and any degree of consistent observation of his game will reveal his frustrating passivity and seeming inability to stay engaged on the court.

There appears to be a mental block, something that prevents Green from sustaining his competitive fire or even kindling it in the first place. Even when he does manage to uncork some legitimate aggression, his manner is more reminiscent of a scared horse than a pouncing tiger. Green observably musters the courage to attack the hoop, and does so in a very concerted way, to the point that it often feels he is straining against his nature to do so. It should come as no surprise, then, that these forced drives read as anxious and out of control, and that only on the rarest of nights do they produce the stunning results we saw in the acclaimed Miami Heat contest.

Green simply isn’t a killer, and he doesn’t have the brash confidence to take over an offense, demand the ball, or assert his identity as the focal point of a team. Regardless of his physical tools, his mental make-up consigns him to the role of an ancillary player.

The data and circumstances surrounding Green bolster this claim. When compared to other stars-in-training, Jeff’s numbers just don’t stack up. Let’s take Kyrie Irving as an example: his rookie year he was handed the keys to a woefully bad team and asked to carry them as best he could. He played heavy minutes and scored prodigiously, but could not will his squad to relevance.

In terms of lack of team success, Green this year is comparable to Kyrie of 2011. By almost every other measure, though, he falls short. Green has barely moved the needle on his “volume” metrics—scoring, rebounds, assists—and actually suffered in terms of efficiency, both turning the ball over more and shooting a career-low 41.6 percent this year (per Basketball-Reference). Most players in his position would have enjoyed a “bad team bump” and seen their per-game numbers rise significantly as they soaked up more minutes and padded theirs stats in garbage time. Green’s failure in this respect could be portrayed as a noble act of unselfishness and commitment to the team concept, but in the context of critique that focuses on his lack of engagement, fits the more damning “aloof player” narrative.

Meanwhile, Green’s Usage Rate (22.9%) sits 5.8% below 2011 Kyrie, and his Win Shares (2.2) amount to just over half rookie-Irving’s 4.1. Usage Rate calculates players’ overall involvement on the court, while Win Shares measures the effects of their actions in terms of wins added. Jeff’s underwhelming performance in these metrics indicate both passivity and ineffectuality on his part. The fact that Green, in his sixth year, has not found it fit to seize the reins of a woeful team and make something of his unprecedented opportunity speaks to his either unwillingness or inability to become “the guy.”

The final nail in the coffin: Green’s Player Efficiency Rating (PER) this year rests at a below-league-average 13.3.* By comparison, Irving posted a PER of 21.4 in his rookie campaign, a robust figure far more indicative of nascent stardom.

Ultimately, a standard Jeff Green outing has become more notable for its discombobulated energy—undulating between frantic and tentative, depending on the sequence—than for baskets, blocks, steals, or assists. For every 43-point outburst there comes a handful of dismal, inconsequential performances to match.

It is for this reason watching Jeff Green feels like subjecting yourself to an optical illusion. In the right moment, the casual eye test will tell you Green is one of the very best players on the floor, fully prepared to assume the concomitant responsibilities and captain his team toward victory. The next glimpse you catch of him, Jeff will be congratulating the other team on their win, and his stat line will look far less impressive than you might have expected had you extrapolated from those moments of brilliance you observed.

I understand the fascination with Green—when he soars in for a baseline dunk or blocks a shot into the stands it is breathtaking—but his bandwagon is one I must abandon. He is too confounding a player, and, for me, the constant vacillation between gasps of amazement and sighs of disappointment are too much to endure. It would be best for all of us, including Green, to acknowledge a simple reality:

Jeff Green does not have the mindset of a superstar. In a league as competitive as the NBA where the slightest flaw is magnified into a glaring weakness, this fluke of brain chemistry is his downfall. Boston would be better served looking elsewhere for its next franchise cornerstone, and Green’s acolytes should look for a new dark horse to champion.

*PER takes into account all the statistical contributions a player makes and boils them down into one number, which is then adjusted for pace and pegged to a 15.0 league average.