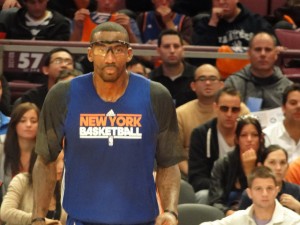 Amar’e Stoudemire says there aren’t any medical limitations on how much he can play right now.

The veteran forward said his playing time is decided by Mike Woodson. And the proud Stoudemire clearly would like to play more, starting Wednesday night at home against Portland.

“From a doctor’s standpoint, there hasn’t been limitations since the first week of the season,” Stoudemire said when asked if he wanted to throw out any minutes limitations in an effort to help the New York Knicks make the playoffs. “So we can’t keep saying limitations — that’s a coach’s decision at the end of the day.

Stoudemire has played well this season. His defensive limitations are what they are but his is an effective scorer with a great attitude. Limiting his minutes is the same thing as not playing him as this point. The Knicks’ frontcourt is full of injuries so no one is going to complain if he gets more playing time. Playing it safe will not protect Stoudemire’s brittle body.

Mike Woodson should play him for 24 minutes a game and see what happens. The Knicks are currently 10th in the Eastern Conference and just lost to the Milwaukee Bucks on a game-winning three. It’s not like things can get much worse. – AL