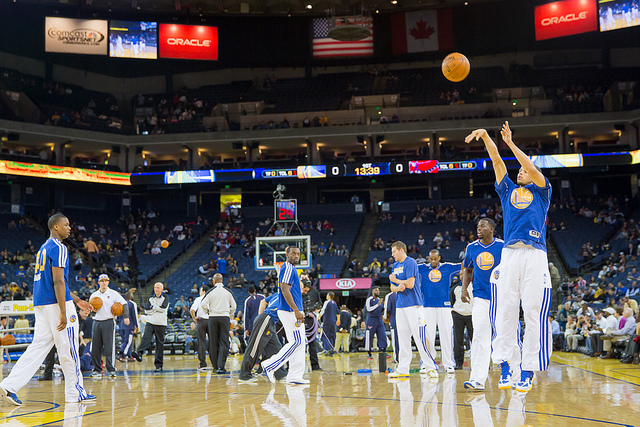 When a jump shot is perfected, it’s a thing of beauty and a pleasure to witness. Dell and Stephen Curry are the greatest father-son sharpshooting duo in NBA history. Both Curry’s have a smoothness to their jump shots, which I can’t explain, but it’s mesmerizing to watch. I’m not using any scoring averages or percentages, only the eye test because sometimes you don’t need stats to prove a fact.

The Blueprint 2: The Gift and The Curse

Trying to live up to the expectations placed on Steph Curry can be difficult to say the least. Having a father as a former NBA player can be a gift and a curse. Imagine as a child having the opportunity to go to the arena with your dad, having the access to the locker room, shooting around with other pros before games, getting pointers from coaches, attending the best basketball camps; that’s the gift. Now imagine the scrutiny, constantly being compared to your father, jealousy from teammates and coaches, rough play from opposing players to stop you from playing well, just to say I shut down Dell’s son Steph. That’s the curse.

Dell’s shooting form was textbook, primarily based on his feet being squared to the basket, elbow aligned with the rim, eyes on target, ball in shooting range, back rotation spin, high arc, good follow through, minimal lift on the jump shot, maintaining body balance and, most important, a super quick release. Dell Curry played 16 seasons in the NBA, most notably with the Charlotte Hornets. He won the NBA Sixth Man of the Year Award in the 1993-94 season, and was the NBA three-point shooting leader in 1999. He was a deadly spot-up sharp shooter, a shooter that made teams pay for slightly sagging off on defense, usually when double-teaming Alonzo Mourning or Larry Johnson in the low post. He needed very little space and time to pull the trigger on his shot.

The Sky’s the Limit

Stephen Curry is the face of the Golden State Warriors franchise and one of the NBA’s premier players and main attractions. He has been voted by the fans as a first-time NBA All-Star starter this season. After a difficult battle with ankle injuries his first few years in the league, Stephen has evolved into a complete player going into his fifth season. Unlike his father, he’s an exceptional ball handler who can get to any spot on the floor, great at changing speeds and directions. He has a great understanding of spacing and angles, which helps him get his shot over bigger defenders. He’s an all-around shooter who is always ready to shoot- off the dribble, curling off screens, step-backs, spot-ups, short or long distance. He has been around the game his entire life, which gives him an edge of knowing the work that goes into being great.

Dell Curry was always considered one of the good guys in the league and now serves as a television color analyst for the Charlotte Bobcats. As a 20-year resident of Charlotte, NC, I’ve had numerous opportunities to see Dell and Stephen in public and they have always conducted themselves as true professionals on and off the court. Dell has always been very personable before Bobcats games and throughout the Charlotte community. It’s obvious he’s passed on his work ethic and basketball IQ, while also teaching his sons (Seth included) to be humble, as well as confident young men. And for his diligence, Steph is genuinely one of the good guys in the league. The elder Curry realized early in his career that it’s a privilege to play in the league, and it should not be taken for granted. Dell has done a great job at passing on life lessons, but he has been masterful in staying out of the way to allow Steph to grow as a ball player and a man.