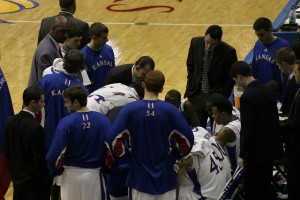 Joel Embiid is projected by many to be the top pick in the NBA Draft, but NBA analyst Greg Anthony believes the Kansas freshman should spend at least one more year on campus.

“The guy I would hope wouldn’t come out would be Embiid because I don’t think he’s ready, I don’t think he’s polished enough,” Anthony told SNY.tv Thursday night at Madison Square Garden where he was doing the Cavaliers-Knicks game.

“[His] instincts aren’t where you want them to be. At this level, they don’t teach, they coach.”

Both Chad Ford and DraftExpress.com have the 7-foot Joel Embiid projected as the No. 1 pick — with both having his Kansas teammate Andrew Wiggins at No. 2 — meaning it would be very hard for Embiid to stay in school.

Sources close to the Kansas program believe that Embiid himself may prefer to stay in school, but the opportunity may be too great for him to pass up (which, in turn, could open things up for Myles Turner to pick Kansas).

“There’s a lot of guys who would’ve been the No. 1 pick [who stayed],” the former Knick point guard said. “I played with a guy [Larry Johnson] who would’ve been the No. 1 pick as a junior, he didn’t come out. You don’t have to because what I tell a lot of these young kids is, this is not for your first contract, this is for your second and your third.

“Our league drafts potential, it doesn’t draft a polished, finished product. I think a lot of these kids are really, really good and really talented but a lot of them could use another year.” ZagsBlog

Wouldn’t it be a real kick in the tooth if Embiid stayed in college for another year? One thing that has become increasingly clear is that the incoming draft class is not as good as first advertised. Several teams have sacrificed this season with the hope of drafting a phenom ready to explode on the professional level. A lot of franchises will be disappointed if they tanked for players who are not coming into the 2014 NBA draft. – AL