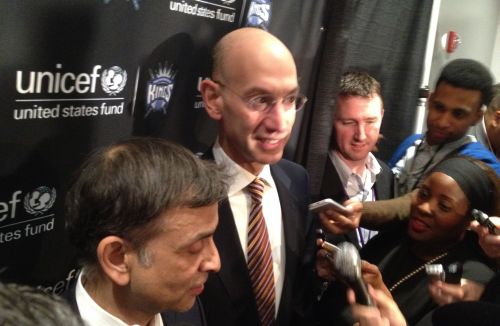 The 30-year reign of David Stern has ended. Many have commended Stern for all of his success, and he has even garnered comparisons to Pete Rozelle, the NFL commissioner from 1960-1989 who is widely considered the best pro sports commissioner there ever was. Others see Stern through a different lens, calling him a tyrant who underserved the world’s second-most accessible sport. The truth is probably somewhere in the middle, and I’m not sure what that truth is given how much of his job took place behind closed doors.

One thing we all know is that as we bid farewell to Stern, his seat on the commissioner’s throne will be taken by Adam Silver. So, who is Adam Silver and what can we expect from him?

After working in litigation for a New York law firm for a few years, Silver joined the NBA as the Special Assistant to the Commissioner in 1992. He worked his way up through the ranks until 2006 when he became a Deputy Commissioner and the Chief Operating Officer of the league. He is also the director of NBA China.

While it’s been noted that Silver has been at Stern’s side constantly during his tenure with the NBA, it’s also known that the two men are quite different from a personality perspective. Stern is a prickly man who is notorious for his bouts of rage. Silver is quite the opposite. His reputation is that of a pragmatic and dispassionate man.

As for what we can expect from Adam Silver, there have only been two things that he has been outspoken about so far: the negotiations for the upcoming television deal and sorting out the arena situation in Sacramento. Unfortunately, neither of these priorities is particularly juicy, as they won’t change the way most fans consume the game.

There is a lot of chatter, although not from Silver’s mouth, about some of the more grandiose changes that he might make. The three big ones are changing the lottery and draft system, fixing the “one-and-done” rule, and European expansion.

We know that the league is considering a change from the current lottery system based on the proposed rotational draft. The proposal called for a system in which each team would get one pick in all 30 draft slots in a 30-year span. So, every team’s draft position would be predetermined for the next 30 years.

I am not a fan of “The Wheel.” It would likely leave several small-market teams hopeless for long periods of time. In fact, I’m not sure the current system is all that bad. So many times the word “tanking” gets tossed around when really a team is rebuilding, and there’s no shame in that. It’s just that some teams are better than others (I’m looking at you, Cleveland Cavaliers).

However, many people are unhappy with the “incentive to lose” model that is currently in place. So, if it must be changed, the only idea that I’ve really liked so far is one posited by Nate Jones on Twitter. Jones is one of basketball Twitter’s most influential, and he suggested getting rid of the draft altogether and adding the rookies to the free-agency pool. With this would come several cap regulations to ensure teams that are already loaded can’t snag an elite guy. For instance, The Oklahoma City Thunder wouldn’t have the cap space to add Joel Embiid to their team. Not only would this make the offseason so much more fun, but it would discourage teams from completely dismantling their talent a la the Philadelphia 76ers. This system seems like the best way to go.

Moving on to the age requirement issue. This is something Silver is probably going to address sooner rather than later. Comb through a room full of basketball experts and aficionados and it will be difficult to find one who likes the “one-and-done” rule. Some people believe that players should be forced to stay in college longer. I’m not sure why. There wasn’t a problem with guys coming straight from high school. In the last two years in which players were allowed to jump from high school to the NBA, 15 players did and 13 of them are still in the league. The two that aren’t: Robert Swift and Sebastian Telfair. If an 18-year-old kid wants to play in the NBA and a team is willing to pay him, why shouldn’t he be allowed to play?

The last issue is European expansion. On Monday Shawn Marion said that he wouldn’t mind if the NBA expanded with a couple franchises in Europe. The globalization of the sport is one of Stern’s legacies, but there’s little doubt that Silver will try to push it further. I like the idea of the NBA having a presence in Europe, but I don’t think that should mean regular trips across the pond during an already crammed 82-game, six-month schedule. A flight from New York to London is seven hours and a flight from Los Angeles to London 11 hours. Basically no professional basketball player would ever want to be on a European team that would be constantly flying to America. If Silver wants NBA players playing games in Europe, he will likely have to shorten the season first, which is why any type of European expansion like this is probably a long way off.

Ultimately, none of these major changes will happen immediately and may be a ways off. We’ll probably only hear Silver’s name when he fines somebody, but it is still exciting to have a new face ruling the NBA and to consider what that might mean for the sport.