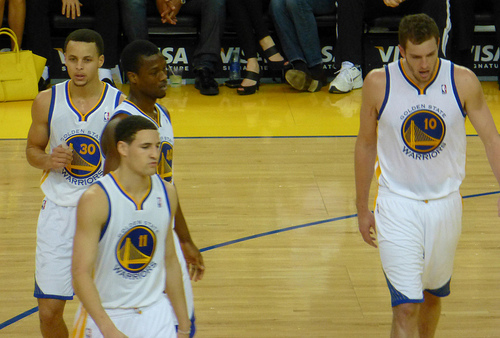 The Golden State Warriors came into Thursday’s showdown with the Chicago Bulls coming off arguably their worst loss of the season in which they were dismantled by the oft listless Charlotte Bobcats for the second time this season. A panicked Twitter Dubnation was ready to blow up the whole team, as if Warriors fans are so used to winning. While blowing up the team is not an option, there are a few other possible in-house solutions to righting the ship.

5. Defensive intensity – Where did it go? The Warriors need to step up their defensive intensity in order to create better offense. Aside from Andrew Bogut and Andre Iguodala, the Warriors are once again lacking a defensive identity. During their 10-game winning streak, they were playing team defense and capitalizing on turnovers, quickly turning them into fast break points and open transition threes for the Splash Brothers.

Which brings me to my next point.

4. Stop living and dying by the three – Yes, I know, I know, this is what makes the Warriors the Warriors. But really, when the Warriors are playing at their best they are sharing the ball and creating easy shots for each other, whether they are threes or not. Great ball movement and a wide-open corner three is living; stagnant offense for 23 seconds and a contested, forced wing three is dying. Where did all the pick-and-rolls with Stephen Curry and David Lee go? Where did all the ball penetration go? It has all but disappeared. They need to get back to good old fashioned basketball, then the open threes will come.

3. Get healthy – Jermaine O’Neal made his return on Tuesday night, and while he looked rusty, he will be a huge addition to their lifeless second unit. Another boost will be the return of Festus Ezeli. Ezeli started 41 games for the Warriors in his rookie year and was a major part of last season’s success. A healthy O’Neal and Ezeli will mean less playing time for Marreese Speights, who has seen better days. Once their second unit returns to full health, they can set it in stone and build some much needed chemistry with newly acquired Jordan Crawford at the point.

2. Get Harrison Barnes’ confidence back – What has happened to Harrison Barnes? Well, nothing. His numbers are similar, if not better across the board than last year for the most part. The difference is that he’s not in the starting lineup playing along side Curry, Thompson, Lee, and Bogut like last year. Instead he’s thrown out on the floor with a cast of offensively inept characters and is expected to carry them all. Barnes isn’t that type of player. He needs to be set up and be a spot-up shooter or slash to the rim the way we saw him do in last year’s playoffs.

Speaking of last year’s playoffs, whatever happened to the David Lee-less lineup in which Barnes thrived? Isn’t it time Mark Jackson made some moves and tried something new? How long can he continue to stunt his team’s full potential? It may even be time to start Barnes and bring Thompson off the bench. Why not? It’s at least worth a shot.

1. Get Andre Iguodala invovled offensively – You send away a major part of your team’s success and pay millions of dollars to get an alleged star, and he’s reached the 20-point mark just three times all season. While Iguodala’s solid perimeter defense and last second heroics have won the Warriors some games this season, it’s time for him to step up to the plate and be an All-Star on both ends of the floor. He clearly hasn’t been the same since he was hampered by a hamstring injury and missed 12 games. If he’s still hurt, then sit him out until he’s completely healthy. But if he is indeed healthy, I would like to see the ball in A.I.’s hands at the point more often with the offense running through him. He tends to make smarter decisions and turn the ball over far less than Curry and Thompson and there would be less stress on them both. Iguodala also has the ability to get to the rim, which is exactly what the Warriors need. They settle for far too many jump shots which are leading to easy transition points and bad fouls on the other end.

It is a long season that is only about half way over. Just a few weeks ago many scholars had the Warriors climbing towards the top of their power rankings, now fans are ready to abandon ship.

Championships are not won in a day.