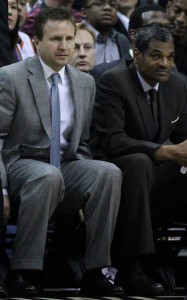 Image courtesy of Keith Allison/Flickr. The Detroit Pistons have relieved Maurice cheeks (pictured right) of his coaching duties 50 games into their disastrous season.

The Pistons coaching carousel reached new lows this morning when the organization decided to fire Cheeks just 50 games into his Pistons tenure.

Assistant John Loyer is the interim coach and will be the ninth head coach of Pistons president of basketball operations Joe Dumars’ tenure that began prior to the 2000-01 season.

But this move was pushed by Tom Gores, who is in the middle of his third season.

“Our record does not reflect our talent and we simply need a change,” Gores said in a release. “We have not made the kind of progress that we should have over the first half of the season. This is a young team and we knew there would be growing pains, but we can be patient only as long as there is progress. The responsibility does not fall squarely on any one individual, but right now this change is a necessary step toward turning this thing around.

“I still have a lot of hope for this season and I expect our players to step up. I respect and appreciate Maurice Cheeks and thank him for his efforts; we just require a different approach.” Detroit Free Press

Maurice Cheeks didn’t stand a chance. Detorit’s offseason acquisitions don’t make any sense together on the court, or as collective group capable of consistent chemistry. It was doomed to fail before it even began, no matter who the head coach was. Cheeks did not help the situation by butting heads with his best players early in the season.

Lionel Hollins is expected to be the front-runner as the team’s next full-time head coach. – AL