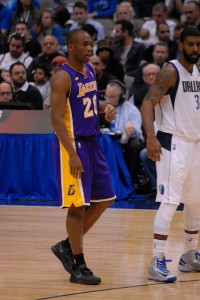 The Los Angeles Lakers have had a turnstyle of point guards this season due to injury, and as a result, two really good players have emerged: Kendall Marshall and Jodie Meeks.

Marshall got picked up by the Lakers on December 19th to help add some depth to the roster. Within his first week, Marshall was the starting point guard.

Previously, Marshall had been drafted by the Phoenix Suns in 2012, but was traded to the Washington Wizards who released him. All of that to say that Marshall hadn’t been very impressive in his NBA career thus far, so the Lakers gambled on him. Smart move, because this young guard is the real deal.

With only 20 games under his waistband this season, Marshall averages 10 points per game, 9.3 assists, and 3.1 rebounds in 32.7 minutes. He’s also chock-full of those intangibles that can’t be assessed statistically, like the energy he has on the floor and his penchant for driving to the hoop.

The good news for the Lakers is that Marshall is one of the few players on their roster who is on contract beyond this year, because the young guard has made his value go up. This season, he’ll make $547,570, then the team has a $915,243 option the next year, and a $1,181,348 qualifying offer the following.

Marshall’s contract doesn’t reflect his worth right now, and the team would be foolish not to pick up the option on his sub-$1 million salary next year. Even if they don’t choose to work out a contract extension with Marshall, he’ll play hard for them because he’ll be a free agent in the offseason.

As for Meeks, the Lakers will have to reach into their pockets to keep him because he’s definitely the real deal too. Last season was a very mediocre year for the guard, but this season his ball-handling has improved, as has his willingness to attack the rim.

Jodie plays defense, which is a rare thing on this year’s Lakers. They really have no defensive system, so it just comes down to who wants to play D and get the ball. He averages 1.4 steals per game.

The tough part is that while Jodie is on the verge of a breakout season, the Lakers are paying him $1.5 million this year. That means his value will be driven up even higher.

So, how big of a contract will Jodie get next season? That’s hard to say. He’s certainly having a year that warrants at least a small multi-year deal with a team, say two years, with a third-year team option for $4-7 million a year. To give you an idea of how much people in Jodie’s position make, Gerald Henderson of the Charlotte Bobcats will make $6 million this year, and the next two as well. He’s averaging 15 points per game, 2.4 assists, and 4.3 rebounds.

The fiscal disparity at this position, like most of the others, makes it hard to determine what Jodie is worth. Also, it will depend on how a team wants to use him. He’s definitely the real deal.

The growth in Jodie’s game will make it tough for the Lakers to keep him if they don’t want to pay his market value.