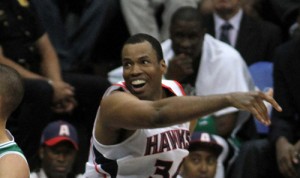 NBA journeyman Jason Collins hasn’t found a team since announcing last April that he is gay. Commissioner Adam Silver says the reason for his NBA unemployment has nothing to do with his sexual orientation.

“In terms of Jason not getting signed, based on everything I’ve been told, it’s a basketball decision,” Silver said. “Our teams want to win and Jason waited until the very tail end of his career to make that announcement.”

Collins’ name was brought back into the news Sunday night when Missouri defensive end Michael Sam publicly came out as gay.

When Collins made his announcement last April, he had just finished up his 12th NBA season and was a free agent. But Collins’ age — he turned 35 in December — and his relative lack of production might have been the toughest obstacles to overcome.

In the 38 games he played for the Boston Celtics and the Washington Wizards last season, Collins averaged 1 point and 1.5 rebounds per game.

Silver said that while it isn’t a competition among leagues, he was proud that Collins “felt comfortable enough that he could come out in the NBA.” ESPN

The general consensus is that Collins is too far along in his career to be an effective player, and the new analytics guys don’t always appreciate the value of an experienced veteran in the locker room. No one really knows the reason Collins has not been signed to a team but several players with a desire to play are sitting on their couch without a team to play for, regardless of sexual orientation. A recent, popular example is Allen Iverson who was basically forced into retirement by league executives who just decided that Iverson’s attitude was not worth the risk of his declining production.

Collins could get picked up this season. If he’s not, we should probably just take it at face value. – AL