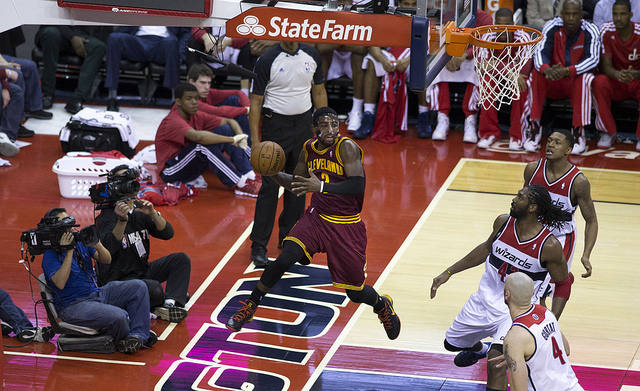 Over the last three decades, the Cleveland Cavaliers have been best known for their misfortunes. There’s “The Shot,” Brad Daughtery’s injury, Ricky Davis’ failed triple-double attempt, “The Decision,” an NBA-record losing streak (26 games), and more recently, the Anthony Bennett saga.

But along the mostly bumpy road has been a surprisingly overlooked trend. Beginning with the 1986 NBA Draft, arguably no NBA franchise has produced as many top-level floor generals as the Cavaliers.

The ’86 draft saw the Cavs obtain two of the better point guards of the late ’80s through mid-’90s in Ron Harper (1st round, 8th overall) and Mark Price (2nd round, 25th overall), who was acquired via trade on draft day. Harper spent three years with the Cavaliers averaging 18.9 points and five assists per game. In his 1986 rookie season, Harper averaged the most points per game of his career (22.9) and finished second in the NBA’s Rookie of the Year voting.

Price is one of just six Cavaliers to have their jersey retired by the team. The 12-year NBA veteran spent his first nine seasons in Cleveland where he was named an All-Star on four occasions. The Georgia Tech product averaged 16.4 points, 7.2 assists and just over one steal per game in his Cavaliers career. The former Dream Team II member is one of only six players in NBA history to shoot at least 40 percent from three-point range, at least 50 percent from the field and at least 90 percent from the free-throw line in a single season. Price’s .904 career free-throw percentage still ranks as the second-highest in league history.

A year after acquiring Harper and Price, the Cavs selected another point guard, three-time All-Star Kevin Johnson with the seventh overall pick of the 1987 NBA Draft. Because of the emergence of Price and Harper, Johnson saw limited minutes as a Cavalier, and was traded to Phoenix less than nine months after being drafted. In just over 20 minutes a game, KJ still averaged 13.7 points and 6.7 assists as a member of the Cavaliers.

Cleveland point guards of the ’90s proved to be just as valuable as Harper, Price and KJ. With Price having already established himself as an All-Star, the Cavaliers looked to the 1991 draft to find a capable backup. Insert Terrell Brandon. The former Oregon Duck spent the first six years of his career in orange and blue where he was twice named an All-Star. The 5’11″ Brandon averaged 12.7 points a game to go along with 4.9 assists in his six seasons with the Cavs. Brandon’s success eventually allowed Cleveland to trade an aging Mark Price. Once given the keys to the car, Brandon excelled as the full-time starter in the 1996-97 season, scoring just over 20 points per game and handing out nearly seven assists. It was during this time that a Sports Illustrated cover labeled him “The Best Point Guard in the NBA.”

With Brandon dealt to the Milwaukee Bucks prior to the start of the 1997-98 season, the torch was passed to yet another young, dynamic point guard. Rookie Brevin Knight took control of the offense and averaged 8.2 assists as a rookie. Knight quickly established himself as one of the league’s top distributors. In just over three seasons with the Cavaliers, Knight dished out 7.6 dimes a game while playing less than 30 minutes per contest. He was a 1997-98 All-Rookie team selection.

The turn of the century saw another new face successfully running the point for the Cavaliers. Andre Miller continued the trend of rookie point guards succeeding in Cleveland. Miller’s rookie averages of 11.1 points and 5.8 assists per game earned him a spot on the All-Rookie team. The eighth overall pick in 1999, he was the first player in franchise history to win the NBA’s Player of the Week award twice in the same season. He still holds the franchise record for most assists in a season (882). That record was achieved in 2002 when Miller led the entire NBA in assists. Miller finished his Cleveland career with averages of 14.5 points and 8.2 assists.

Though the point guards of the mid to late 2000s generally failed to match the success of their predecessors, the 2011 draft brought “The Next Big Thing” to the shores of Lake Erie. In the summer of 2011 Kyrie Irving was selected with the first overall pick and has quickly become one of the league’s best. A two-time All-Star, Irving is easily the best of a talented group of point guards in Cavaliers history. At the halfway mark of his third season, Irving’s accolades prove he is on the fast track to superstardom: Rookie of the Year, two-time All-Star, Three-Point Shootout champion, Rising Stars Challenge MVP, USA National Team pool. Irving has career averages of 20.9 points, 5.9 assists and 3.5 rebounds per game. “Uncle Drew,” as he’s known in his Pepsi Max commercials, shoots 86 percent from the line and 38 percent from three. Irving is widely regarded as having the best ball handling skills in the NBA.

Since the 1980s Cleveland has been synonymous with change. From their team colors: blue, orange, navy, wine, gold, and a few others in between. To their owners: Stepien, Gund, Gilbert. To their arena: Richfield Coliseum, The Gund, and The Q.

But one constant has remained, the successful play of point guards in the city of Cleveland: The NBA’s point guard factory.