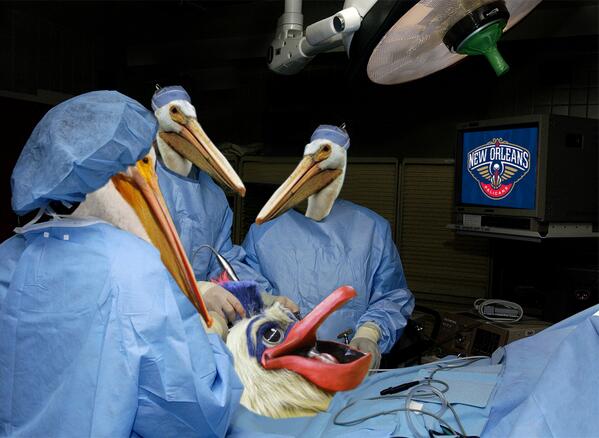 Major props to the PR team of the New Orleans Pelicans. The Pelicans have decided to give their new mascot a makeover in the funniest way possible. Check out their press release.

The New Orleans Pelicans announced today that mascot Pierre the Pelican underwent successful surgery yesterday at Ochsner Medical Center in Jefferson. A detailed account of his injury and recovery will air during the Fox Sports New Orleans broadcast on Wednesday, Feb. 12 when the Pelicans take on the Milwaukee Bucks at 7:00 p.m.

Team Physician Dr. Matthew McQueen performed the reconstructive surgery at Ochsner Medical Center and has indicated the procedure was quite involved. “Injuries like this also affect other aspects of the skull, which had to be addressed.” McQueen and his team of experts, including Curator of Birds for Audubon Zoo Carolyn Atherton, expect Pierre to make a full and speedy recovery.

“Pierre…he is hardcore. He’s already put as much into his rehab as I have seen any athlete put into his rehabilitation. He had a lot of help from his coworkers, supporters and fellow mascots,” McQueen said. “He’s already quicker, faster, and stronger. I haven’t seen anything like this in my life. Maybe there is something about bird recovery that is special. I wish we could see this in all the people we treat. It is amazing.”

This is an excellent idea to unveil right before New Orleans hosts the 2014 All-Star weekend. I can’t wait to see the final result. – AL