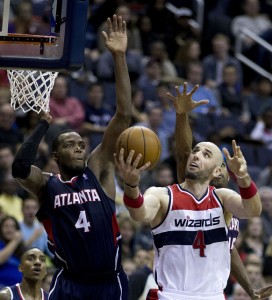 The common narrative surrounding the Eastern Conference is that it is a league of two; a heap of flotsam ruled easily by the Miami Heat and Indiana Pacers and otherwise devoid of any mettle or pride.

A number of teams have challenged this perception of late, among them the Washington Wizards, Brooklyn Nets and Toronto Raptors. Since the calendar flipped to 2014 these teams have shown more pluck and liberated the East from historically bad territory into the land of run-of-the-mill mediocrity—perhaps even respectability.

John Wall has been excellent for D.C.—a torrid one-man fast break—and Nene and Trevor Ariza have noticeably stepped up their production. Brooklyn has unearthed unorthodox, gargantuan lineups that have befuddled opponents and helped them right the ship in a post-Brook-Lopez world. Kyle Lowry and DeMar DeRozen have submitted sterling campaigns for Toronto and pushed their squad over .500 with strong play that has only gotten stronger since Rudy Gay’s departure.

These are all pleasant developments that endeavor to make the East watchable, a task that seemed impossible earlier in the year when after roughly 20 games only two teams had cracked the ten-win plateau.

But to paint the Eastern Conference beyond Miami and Indiana as a monolith just now stirring from its malaise glosses over the gritty and tenacious efforts of one team that has competed from the outset: the Atlanta Hawks.

Lost in the milieu all year long, Atlanta has quietly proved itself a gutsy, audacious club capable of beating anyone under the right conditions. On December 27th they lost franchise stalwart Al Horford for the season to reconstructive pectoral surgery, but bounced back bravely in the month of January, racking up three signature wins in quick succession. The Hawks beat Indiana by ten on January 8th, narrowly defeated the Houston Rockets on the 10th, and then dispatched Miami in a 121-114 shootout on the 20th, proving that, Horford or no, they were determined to compete.

Following that outburst the Hawks have since cooled, thanks primarily to a murderous schedule over their last ten games, which included contests against Miami, San Antonio Spurs, Indiana, and Memphis Grizzlies. A stress fracture to rookie Pero Antic’s ankle has been no help, either, as it has kept the impressive Macedonian inactive since January 22nd and cost an already razor-thin club valuable production off the bench.

That being said, Atlanta still owns an even record (25-25) and has found ways to keep their engine humming. Their record of late is not indicative of an unraveling; the Hawks have lost four of their last six by a combined 14 points, a heartbreaking margin that has just barely cost them “scorching hot” headlines and bawdy op-eds anointing them the NBA’s “latest surprise.”

Less heralded guys like Kyle Korver, Jeff Teague and Paul Millsap all deserve to be commended for their strong play, and most importantly, for stepping up their production without stepping outside their respective skillsets. Korver has refined himself into an even more specialized and lethal gunner, draining threes at a gaudy rate (46.7%) and with unprecedented volume (256 attempts already). Teague, for his part, has maintained his above-average numbers from last year and proved a responsible caretaker at the point guard spot.

Millsap has been especially good, upping his scoring average (17.7 per game), adding a legitimate three-point shot (36% from the behind the arc), and making statistical contributions on the defensive end (1.9 steals, 1.2 blocks per game) while also captaining what by all rights should be a mediocre defense to a top-ten league rating. He is the heart and soul of the team and has shown rare ability as a leader—a trait that was never particularly apparent during his years with the Utah Jazz. Millsap is an eminently deserving NBA All-Star and should be applauded for keeping a tenuously constructed roster together in the face of adversity.

Looking forward it is undeniable that the East, while improving, is still a weak conference, and that this Hawks team—even sans Horford—is a strong candidate to claim the third overall seed come playoff time. They have a challenging schedule ahead (it never pays to be in Miami’s division), but it is peppered with a few softballs, including games against the Milwaukee Bucks (twice), Boston Celtics (twice) and Utah.

Besides, according to the “Pythagorean Wins” model, their expected win-loss record to date should be 27-22. That their actual record falls below this threshold implies chance and misfortune have cost them victories. If in fact the principles of statistics apply, Atlanta should be compensated with a few favorable bounces and unexpected wins in the latter half of the season. This is an encouraging thought for anxiety-ridden Hawks fans who have watched their team go 7-11 in games decided by five points or less this season.

There is also still time for Atlanta to upgrade its roster via trade. Do not discount this possibility, as the Hawks have tremendous financial flexibility and GM Danny Ferry is not the type to dawdle when presented with an opportunity to improve his team. Rumors have emerged linking the Hawks to a potential Jeff Green swap with Boston, a move that would infuse their roster with some sorely needed athleticism and perimeter scoring punch. Such a move would secure the Hawks’ superior standing in the Eastern Conference.

Whether or not they make a move at the deadline, though, the fact remains that after 50 games of impressive relevance, Atlanta deserves our respect. They are a gritty squad down there in the “A.” It will be interesting to monitor their progress—particularly over the next four games, as they face off against a quartet of Eastern Conference playoff teams and set the tone for the impending post-All-Star-break melee. I can’t wait.