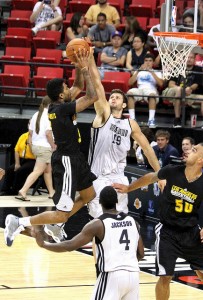 Backup big man Joel Freeland suffered an MCL sprain in his right knee during the Blazers’ 98-95 Tuesday night loss to the Oklahoma City Thunder at the Moda Center. The 6-foot-11 power forward/center is expected to miss four-to-eight weeks.

Freeland suffered the injury in the first quarter — two minutes, 18 seconds into his first shift — when he tangled with Nicolas Batum while fighting for position in the paint.

Oklahoma City center Steven Adams pushed Freeland away from the basket as the two jostled, and Freeland’s right leg tangled with Batum’s leg and bent awkwardly. Freeland instantly collapsed to the court in pain and had to be helped to the locker room by Wesley Matthews and Thomas Robinson.

“I saw him when he went down and I was like, ‘Come on,’” said Blazers power forward LaMarcus Aldridge, who talked to Freeland on the court after the injury. “He was like, ‘No, I’m done.’ I said, ‘What do you mean?’ He said, ‘I’m done.’ So he thought it was pretty serious, but you never know.”

A couple hours later, magnetic resonance imaging tests revealed the MCL sprain. Freeland did not travel with the Blazers to Los Angeles for their Wednesday night meeting with the Los Angeles Clippers. The Oregonian

The Blazers now have their first significant injury of the season (CJ McCollum missed 34 games with a broken foot but he’s still unproven). They have cooled off significantly since their hot start including going 5-5 in their last ten games. The defense ranks 26th in points allowed per game at 103.4 per contest, and this is likely to get worse since Freeland was one of their better defenders.

There was already a good chance for them to slip all the way down to the fifth seed before February ends. This certainly won’t help their cause. – AL