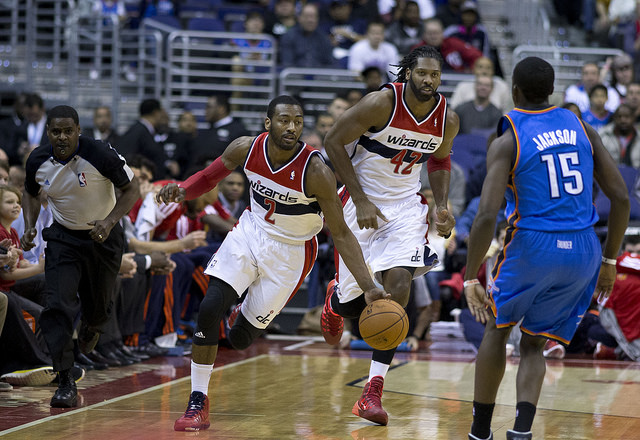 Charlotte Bobcats
The Bobcats currently stand at 23-30, sitting in 8th place of the laughably bad Eastern Conference. The Bobcats have been surviving this year from a healthy dose of the Gerald Henderson/Al Jefferson/Kemba Walker triumvirate. Jefferson leads the team with 20.5 points and 10.5 rebounds per game, and is coming off an All-Star caliber January, where he averaged 23.9 and 11.3, respectively. If one other player can pick up his scoring, the Bobcats offense would be in good shape. Michael Kidd-Gilchrist and Josh McRoberts are all averaging around eight points, and if one of them could get into double figures, it would take even more pressure off the Bobcats’ “big three.” Look for Kidd-Gilchrist, who seems to have hit the sophomore wall, to bounce back and pick up his scoring. MKG is shooting 46.3 percent from the field, so an increase in field goal attempts could be just what the doctor ordered.

Washington Wizards
Washington is quickly becoming one of the feel good stories of the NBA season. Finally over all of the injuries that have plagued them the past  couple of years, the Wizards got over the .500 mark earlier this season for the first time since 2009 this season. As of writing this, they sit at 25-27, 1.5 games out of home-court advantage in the East. While their record seems to be unremarkable, the Wizards have gotten there in a remarkable way. The Wizards are 12-14 on the road, and 13-13 at home. They haven’t been more than one win or loss away from .500 in any month thus far. Washington has been incredibly evenkeeled, never streaking above four wins or losses. I feel like their time is coming. John Wall is finally healthy and playing well, Bradley Beal is coming along as people thought he would, and Nene and Marcin Gortat make for a formidable frontcourt duo. Look for the Wizards to go on a run and potentially jump ahead of the Atlanta Hawks and Chicago Bulls for a home-court advantage in the first round.

Golden State Warriors
After having all of the hype coming into the season after last year’s playoffs that Stephen Curry and Klay Thompson put together, the Warriors have established a good record, but are still sitting at the eighth spot in the Western Conference standings. Dates with the Sacramento Kings, Houston Rockets, Brooklyn Nets, Detroit Pistons, and Chicago Bulls are what awaits the Warriors on the other side of the All-Star break. A break for the oft-used Warriors backcourt and a post-break schedule that starts with four out of five against under .500 teams should be just what Golden State needs to jump up a few spots in the standings, especially if the Portland Trail Blazers keeps regressing after their incredibly hot start.

Memphis Grizzlies
If not for the loss of Mike Conley to an ankle sprain, the Grizzlies probably wouldn’t have made this list. Memphis had made it into a playoff spot after posting the best record since December 21st until the injury, and it seems as if their push had already started. Now with Conley down, the Grizzlies have gone 4-3 since the injury and are 1.5 games out of the eighth seed, which is inhabited by the above mentioned Warriors. Conley is expected to be back after the All-Star break, and look for Memphis to break off another huge run as they’ll finally be 100 percent after adding Tony Allen back to the mix. Conley’s injury makes one more hiccup in the Grizzlies season following a slow start due to a coaching change and then an injury to the reigning Defensive Player of the Year, Marc Gasol. The Grizzlies had posted the 4th best defensive efficiency and the 10th best offensive efficiency in that span since December 21st, and those numbers should return post All-Star break.

Brooklyn Nets
Brooklyn has already started to surge, thanks to a 10-3 January that saw the maligned Jason Kidd take home NBA Coach of the Month honors. The Nets have a modertely tough February schedule to go through, but a relatively easy March and April that is helped by the fact that they play in the weakest division in the league. Brooklyn sits three games behind the revitalized Toronto Raptors in the chase for the Atlantic Division crown, which means they sit three games out of home-court in the first round. By now you know the deal: the Nets are old, slow and a mess. But amid all of the problems, the Nets still have a few things going for them. They have leadership that has seen everything. You’re not going to show Kevin Garnett, Paul Pierce and Jason Terry anything they haven’t seen before. They have talent, thanks to their fearless leader, Mikhail Prokhorov, who threw money at any talented player that was on the market. Andray Blatche, Alan Anderson and Andre Kirilenko provide a great supporting cast. They have the depth and talent, even before you mention Deron Williams, who could once lay claim to being one of the best point guards in the league. If Williams gets back to anywhere close to his old self, the Nets could be dangerous come April.