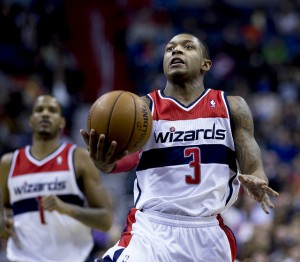 We see time and time again that certain teams and players coast through the first half and then pick it up and run teams out of the building in the second half. Some players just have a knack for thriving on larger stages, some may need a little extra motivation, some just need some time off and a fresh start. Here are some players that could kick it into gear post-break.

Bradley Beal, SG, Washington Wizards
Beal had a career-high 37 points on Tuesday night. Is this a sign of things to come? He’s averaging 17 points, 3.3 assists, 3.8 rebounds and having a solid sophomore season, but he definitely has room to improve. The backcourt makeup of Beal and John Wall currently has the Wizards in the sixth seed of the Eastern Conference, but still just barely floating around .500. Charles Barkley has repeatedly said that Wall and Beal will be the best backcourt in the game in a few years. Wall is a first-time All-Star this year in just his fourth season. Can Beal follow in his footsteps? He will need to if the Wizards want to move up in the standings and make sure they avoid having to face the Pacers or Heat in the first round.

Andre Iguodala, SF, Golden State Warriors
Iguodala is due for a breakout  month offensively. He has reached the 20-point mark just three times this season, with two of those coming in the first week of the season. You can say it’s been quite an offensive drought for him. However, the All-Star break will give Iguodala some much needed time off and the second half will be a nice fresh start. While he is only averaging 9.6 points per game, down from his career mark of 14.8, he is shooting a career high 48 percent from the field and 38 percent from beyond the arc. Those numbers can bring some hope to Warriors fans as they look ahead to the stretch run of the regular season, praying for that rare second straight playoff berth.

Paul Pierce, SF, Brooklyn Nets
It’s not that Pierce has been particularly bad this season, more like quiet. But that won’t last much longer as the Nets continue to fight for that third seed, hoping to avoid the Indiana Pacers and Miami Heat in the first round of the playoffs. Pierce is averaging 13.2 points, 4.8 rebounds and 2.9 assists thus far. I don’t expect those numbers to drastically improve, however, I fully expect some late-game takeovers and game winners. Pierce knows what it takes to win, he’s been there before and wants to prove that he still has what it takes to be a champion.

Kevin Garnett, PF/C, Brooklyn Nets
Much like Pierce, Garnett has the heart of a champion. KG’s posting career-low numbers across the board, but that is partly due to the fact that he is playing just 21.5 minutes per game. That’s over 14 minutes less than his career average. While, yes, KG is old and cannot play as many minutes as he used to be able to, the Nets are wisely saving him for the playoffs. Even though Brooklyn started off incredibly slow, Jason Kidd and Co. knew that the Eastern Conference was so weak that they could still make not only the playoffs, but maybe even grab that aforementioned third seed as well. After all, “Anything is possible!“

Manu Ginobili, SG, San Antonio Spurs
Manu has been out from a strained hamstring since late January, but is set to return immediately after the All-Star break. Ginobili is one of those players that steps up down the stretch every single year. Disregard his numbers across the board, you can expect a few late game heroics in the upcoming months from the 11-year vet. You just can’t count out the San Antonio Spurs; no matter what. After all, they were just seconds away from knocking off a juggernaut Miami team and winning it all last season.

Pau Gasol, PF/C, Los Angeles Lakers
Pau is the wildcard of this group. If he gets traded to a contender, he will step his game up and help that team immensely. If he stays put, then he will continue to produce on a lottery team that doesn’t matter, and will waste what the 12-year vet has left this season before becoming a free agent. It makes sense for both Pau and the Lakers to part ways. Pau is still putting up solid numbers – 17 points, 10.2 rebounds, and 3.4 assists, although they may be a bit inflated given the Lakers’ current inept roster. A playoff contender could most definitely use his skills and experience.