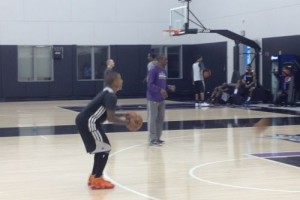 The regular season was put on hold this weekend, although the NBA didn’t take a break, hosting its annual All-Star event, this year in New Orleans.

While there were plenty of stars on hand, participating in a number of competitions throughout the weekend, they represented but a minor contingent of the NBA.

Most of the league was at home, enjoying a respite from a grueling 82-game marathon of a season. Ben McLemore was in the Big Easy for the festivities, but his Sacramento Kings teammates and coaches spent the time off with their families, away from the game, for the most part.

Michael Malone spent the weekend with his family in Lake Tahoe, Calif., taking advantage of the rare opportunity to remove himself from the demands that come along with being an NBA head coach.

“I owe it to my wife and to my daughters. I can’t be in that fox hole all the time. To be very honest, before I had kids I was 24/7 and I don’t think that’s a healthy thing. I need balance in my life and my balance – what brings me back to reality – is my family and spending time with them,” Malone said. “I definitely got work in, but I made time to be a father, to be a husband.”

For players, competing at the game’s highest level can take a toll physically, and 53 games in, the Kings saw the break as a much needed chance at recovery. Sacramento, in particular, has DeMarcus Cousins coming off of a hip flexor injury and Jimmer Fredette battling an illness.

Isaiah Thomas took the opportunity to rest his body, but couldn’t keep his mind off of basketball, he said, and was focused on his goals coming out of the All-Star break.

“I watch a lot of basketball, so I’m always thinking about what I can do better, first and foremost, and then what we can do better as a team,” said Thomas, who went back to his hometown of Tacoma, Wash. “For me, it was good to get the break, it was fine to get away from guys, but at the same time, I’m always thinking basketball and what I can do personally to help this team out.”

Along with the physical aid the break provides, Malone said it helped him and the players psychologically as well. With their minds refreshed, Sacramento will focus on establishing its identity in the final 29 games of the season, Malone said.

“You could tell, in the gym tonight, there was a great energy, positive energy, which really excites me,” he said. “… Everybody was excited to get away, spend time with their respective families, clear your mind a little bit and look back and reflect on what’s happened so far and what we expect going forward.”

Social media platforms were atwitter Saturday night after the abrupt conclusion of the NBA Dunk Contest, which many panned as a failure.

Fans weren’t the only one’s upset by how the event played out, though, as players expressed their disappointment as well.

The Kings had a representative in the competition in Ben McLemore, but because of the format he only got to do one dunk – a theatrical Air Jordan-esque leap over a seated Shaquille O’Neal. Thomas, like many who watched Saturday’s Dunk Contest, was left wanting more.

“They got to change that format of the Dunk Contest. That was disappointing because I feel like if it was the old format, that may have been one of the best Dunk Contests we’ve seen in a while,” Thomas said. “It sucks for guys like Ben, and even Terrance Ross: he couldn’t even defend his title. Everybody basically got one dunk, so hopefully they change that next year.”

After practice Monday, McLemore briefly discussed his All-Star Weekend and, while upset he didn’t get to show off his athleticism more, was grateful for the experience.

“I had plenty more dunks and probably would’ve got the crowd going and stuff like that,” he said. “There were a couple more dunks I wanted to do, but at the same time, I enjoyed it, had a good experience and hopefully I’ll be back there next year.”