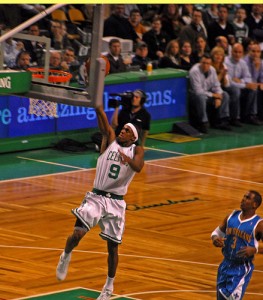 This is week is like a sequel to There’s Something About Mary starring Rajon Rondo.

If we are to believe the various rumors, most general managers in the league have at least called Celtics’ GM Danny Ainge for Rondo’s asking price.

Sources continue to insist, however, that Ainge has to get something certain in return (see: the bid he made for Chris Paul 21⁄2 years ago). Word is the C’s would take draft picks, but they’d have to be guaranteed in the top few — even if they came in separate years — and it’s hard to see anyone meeting that price.

Things were said to be “all quiet” on the Celtics front yesterday, but two of the general managers reached yesterday said they’re waiting to see if the prices change on some Celts as Thursday’s NBA trade deadline approaches.

Holding onto to Rondo past the trading deadline has no upside. The team will win more games with Rondo on the roster, and no plans appear to be in place to mold the roster around his talents. Ainge has stockpiled a ridiculous number of draft picks which puts Boston in position to be a potential player in every major trade because of their myriad assets.

The Celtics will be in position to contend down the line but that’s not likely to happen for a few seasons. Cutting bait is best for all involved even if they do not receive what they consider for compensation for Rondo. – AL