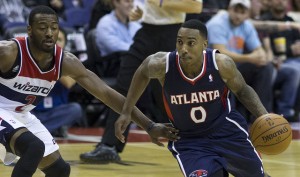 The New York Knicks are desperately looking for a way to improve their point guard spot before the February 20 trade deadline. After realizing that the Toronto Raptors might just not let Kyle Lowry go, the Knicks pointed their interest towards the Atlanta Hawks’ Jeff Teague, according to the latest reports. The Knicks need to find a more reliable and productive point guard than Raymond Felton, and Teague seems to be a good fit.

The Knicks are struggling badly this season and despite their recent improvement, they still lie 2.5 games behind the eighth-seeded Charlotte Bobcats. All that in an Eastern Conference which is one of the worst conferences, quality-wise, of the last decade. And all that in a season where the Knicks were supposed to be chasing the Indiana Pacers and the Miami Heat at the top of the conference.

The Knicks have experienced lots of troubles this season with their play maker role. Raymond Felton has been really inconsistent with his outputs. The 29-year-old veteran is recording a career-low 10.4 points per contest and doesn’t seem to be motivated to improve.

The Knicks don’t have the depth they did last season at their point guard spot, when Jason Kidd was in uniform, too. This season, the Knicks have had to rely on Pablo Prigioni and even Beno Udrih for stretches. Nonetheless, none of those options paid off for Mike Woodson.

Jeff Teague, on the other hand, is recording a career season with the Atlanta Hawks. He has improved his overall performance and, together with Paul Millsap, has led the team to a surprising record. Teague is averaging a career-best 15.6 points per contest to go along with 7.2 assists.

The problem the Knicks will face in a potential deal with Teague is that the 25-year-old point guard will have to agree. The Atlanta Hawks matched an offer sheet for Teague this past summer. So far it’s been the right move, as Teague has turned out to be the main facilitator of the team. But it also means he has to accept any potential trades.

Teague has three more seasons in his contract, not including 2013-14. In each of those next three seasons, Teague will earn $8 million. If the Knicks acquire him, the team would have to sacrifice a big chunk of its financial flexibility. New York wants to shake things up and perform some significant moves over the next couple of seasons and Teague’s addition could limit that.

It remains to be seen if New York will be able or even willing to dig deeper into such a trade.