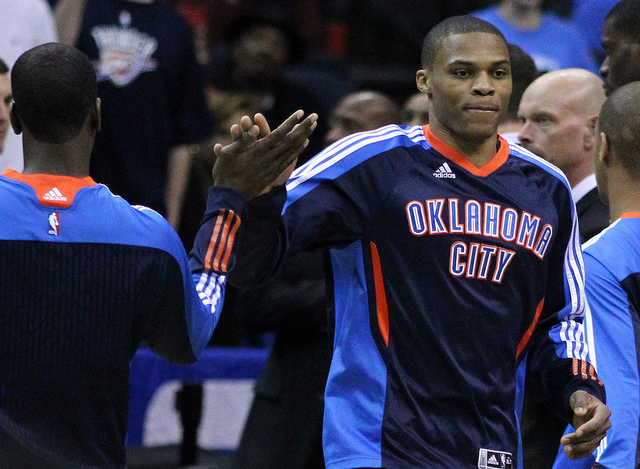 With a record of 43-12, the Oklahoma City Thunder are rulers of the roost in the Western Conference. They currently sport a 3.5-game margin over the second-seeded San Antonio Spurs and show no signs of letting up in the season’s latter stages. This reality is made all the more terrifying for opponents when one chilling fact manifests itself in their psyches: Kevin Durant—the eviscerating, even-handed, ultra-efficient basketball machine—has a partner in waiting.

For more than half the season, OKC has been fighting with one hand tied behind its back. Two-time NBA All Star and full-time force of nature Russell Westbrook has been sidelined by complications tied to the MCL injury he suffered in the 2013 playoffs, and to date has only managed to play 25 games for the Thunder this year.

As others have documented at length, Kevin Durant has elevated his game in Westbrook’s absence. Per NBA.com, he is shooting and scoring with unprecedented efficiency (51 percent from the field) and volume (31.5 points per game) while also distributing the ball at a career rate (5.5 assists per game). That he has accomplished these feats as the unwavering focal point of the offense makes them all the more impressive. Opponents key their defenses around containing Durant, but it proves consistently without effect. He seems to transcend defense as a concept. LeBron James was not speaking in hyperbole when he called Durant truly unguardable.

Westbrook’s return, then, begs this question: Given Durant’s otherworldly play, does the addition of another high-flying, explosive scorer signal the death knell for the rest of the Western Conference?

But there are still slivers of hope to which opponents can cling. Perhaps Westbrook’s reincorporation will prove awkward, and the challenge will disrupt Durant’s basketball nirvana. He’s in a state of grace with the current roster and changing the equation—even by adding a top-15 talent—could shake him out of it. This is not likely, especially considering the club has almost 30 games to negotiate the transition before the playoffs begin. It’s still a hope, though.

There is also the possibility that Westbrook returns to the court with a healthy coat of rust. This is a fair expectation, considering the psychological difficulties known to plague players coming off repeated knee injuries. He will have to learn to implicitly trust his body again, a task that can take a few weeks or a couple years. Given the extent to which his game is predicated on quick cuts and explosive athleticism, convincing himself of his health will prove even more essential for Westbrook than others. That being said, Westbrook functioning at even 75 percent capacity would prove a huge asset to the Thunder come playoff time. Instead of regaining an elite player for their stretch run, it would be as though they acquired a borderline All Star—a move that would still push them from frontrunners to favorites.

The last hope for OKC’s competition is also the most audacious, and, if proven true, could have drastic implications going forward.

It is true, after all, that Westbrook outpaced Durant last year in field goal attempts, launching 18.7 per game to Kevin’s 17.7 (per Basketball-Reference). I do not think many would argue this was a prudent shot distribution, or that Westbrook was a better player by any stretch of the imagination. So why did it happen?

If we posit a scenario wherein Durant’s flowering this season is a direct product of his freedom from Westbrook’s shackles, then the Return of Russ becomes a curse disguised as a blessing. His reintegration becomes the catalyst transforming the Thunder from a Durant-centric wrecking ball into a lurching behemoth—a confused squad captained by a still-recovering point guard and a virtuoso small forward who suddenly feels uneasy dominating the ball in key moments. This is the nightmare outcome for Oklahoma City, where the whole adds up to less than the sum of its parts.

But this, again, is unlikely. Westbrook is outstanding, Durant is outstanding, and the two have enjoyed substantial success together. It was not Westbrook’s shot selection or Durant’s unwillingness to take the reins that extinguished their championship hopes last year; it was Westbrook’s injury. A fundamental schism between the two is a fun thought experiment to daydream over, but the numbers do not bear it out. By all rights, the rest of the Western Conference should be swallowing hard and preparing for the worst.

These hopes are the final straws for the pseudo-contenders to grasp at as Oklahoma City revs its engines and prepares to lay some rubber down on the track. Durant is the leading candidate for MVP, and tonight, against Miami no less, he regains his potent sidekick. I think I’m speaking to a sentiment held around the league when I say: look out.