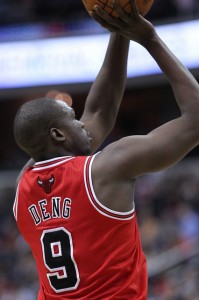 Forward Luol Deng’s reluctance to commit to a long-term extension with any team before July free agency makes it unlikely that the Cleveland Cavaliers can find a willing trade partner before Thursday’s NBA deadline, league sources told Yahoo Sports.

The Cavaliers have had conversations with several teams, including Dallas, Detroit and Indiana about Deng, league sources told Yahoo Sports. Nevertheless, there’s no traction on a deal and no team seems inclined to give up valuable assets for a player who could walk away in free agency.

Deng is determined to investigate free agency in July before making a decision to stay with Cleveland, sources said.

Cleveland has tried to get a sense of Deng’s openness to re-signing this summer, and Deng has expressed a willingness to consider the possibility, league sources said. Deng has yet to play at a high level in Cleveland, where he’s found a young team in flux, a significant contrast from the structure and stability of the Chicago Bulls.

Deng will be seeking a free-agent contract in the range of $12 million to $13 million a year this summer, and Cleveland’s maintaining of his Bird Rights allows the Cavs to give him a five-year extension with annual raises. Acting Cleveland general manager David Griffin has been gauging Deng’s interest in recent days with teams, as ESPN first reported. Yahoo Sports

Who can blame Luol Deng for being stubborn considering what happened after being traded the first time? I’m not sure he will get the money he’s looking for in free agency but this is the best decision for his career in the long-term. – AL