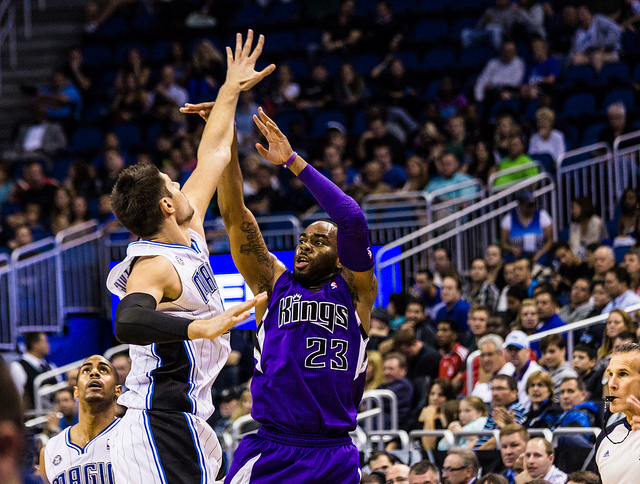 As the NBA trade deadline approaches, rumors come rushing in, though only few come to fruition. The Sacramento Kings were one team that actually managed to complete a trade ahead of the deadline, shipping off Marcus Thornton to the Brooklyn Nets in exchange for Reggie Evans and Jason Terry.

Thornton exits Sacramento in the third year of his contract, which was likely a key factor in his departure. Thornton is scheduled to make a little over $8 million this season and nearly $8.6 million next season.

Throughout his career, Thornton’s been known as inconsistent – a streaky shooter capable of catching fire or becoming ice cold any given night—but this season he has consistently underwhelmed. In 46 games for the Kings, Thornton averaged 8.3 points in 24.4 minutes a game on 38.1 percent shooting from the field and just 31.8 percent from three. His lack of production dragged down the value of his sizeable contract.

The Kings are set to pay Terry and Evans just over $7.2 million next season, a figure that could be even less if they and Terry agree to a buyout. Wednesday, Michael Malone wouldn’t commit to playing Terry significant minutes and general manager Pete D’Alessandro repeatedly mentioned sitting down with Terry to discuss his role with the team, suggesting a discussion of a buyout between the two parties.

Clearing up cap space wherever possible may prove vital in re-signing Isaiah Thomas, who is a restricted free agent this summer and coming off a career year.

D’Alessandro, though, denied he’d broached the subject with Terry yet.

“I talked to Jason a little while ago. When he gets here, we’re going to talk about his vision for his role because he is a veteran and he has a heck of a resume,” D’Alessandro said. “He really is a great veteran, so we’re going to pay him that respect and talk to him. I think, depending on how he feels and his conditioning, we’d like to see him on the floor a little bit and help bring along the younger guys as well.”

With the trade, Sacramento is bringing in two new players that could add a veteran presence to a predominantly inexperienced locker room, but it’s also losing a player that has been with the franchise since his sophomore season.

When trades loom or occur, players are usually quick to remark that the NBA is a business, which is why the numbers surrounding Thornton lead the discussion of his departure, but Malone emphasized the personal side of the industry.

“I feel bad because, end of the day, a lot of people look at these guys as stats, analytics, but they’re people. Marcus Thornton, I appreciate everything he did,” Malone said. “I could see it, to be very honest, on a few of our guys’ faces the last couple days that it’s been weighing on them. … It becomes a big distraction and, as a coach, you’re just trying to limit the distractions to your team so you can focus on the task at hand.”

Terry brings a championship pedigree—having won in college with Arizona and in the NBA with the Dallas Mavericks—and also has a deep connection with one of Sacramento’s key players. He and Isaiah Thomas hail from the same area in their home state of Washington and Thomas likens Terry to a “big brother” figure.

“I’ve known (Terry) since I was second grade. His dad coached me from second grade to, like, eighth. So, for him to be on the team now is a little weird,” said Thomas, before going on to refute any notions that Terry’s age would make him a non-factor. “A guy that can shoot it like that, all you got to do is spot up.”

The move has potential to impact Sacramento’s salary cap figure in the future, but will also immediately affect the team’s young players. The void Thornton leaves will be filled by Ben McLemore, who will take the reigns as starting shooting guard, and Ray McCallum will also see more time on the floor, Malone said.

“The opportunity it brings for some young guys. … Now we can play Ray a little bit off the ball at times too,” D’Alessandro said before Wednesday’s game. “I’m going to leave that to Michael, but we talked about clearing up some room for those guys to get out there for these last 29 games.”