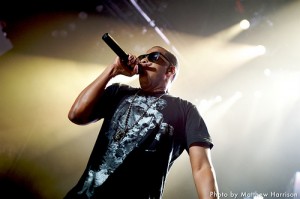 Just ask Shaquille O’Neal, who did both. Or Master P, who tried. What some fans might not realize is how often rappers namedrop ball players in their rhymes. Everyone from Biggie to Eminem has mentioned NBA players in their lyrics, though often subtle and obscure.

When Jadakiss famously said, “I’m a make bucks like Milwaukee, cause like Sam, I Cassell,” only educated basketball fans would get the reference. First of all, you have to know who Sam Cassell is. Secondly, you have to realize that he once played for the Milwaukee Bucks.

Some rappers, such as Action Bronson and Fabolous, seem to talk about NBA players more often than they speak about hip hop essentials such as cars, money, and weed. To commemorate the relationship between basketball and hip hop, ballermindframe.com will be posting a regular “NBA hip hop lyric of the week.”

Jay Z is among the most influential people in America. He’s also one of the rappers who often mentions NBA players. It’s no coincidence, as the people buying rap albums are many of the same people that support professional basketball. Jay isn’t a businessman. He’s a business, man. So it’s only fitting that the first entry into the new hip hop lyric of the week feature comes from Jigga.

From Michael Jordan to Scottie Pippen, some of HOV’s most classic lines involve namedropping ballplayers. He doesn’t even care if his Nets go 0-82, because it’s all gravy to him anyway.

In addition to mentions of receiving high-fives from Knicks and Nets and tripping referees, Jay raps an iconic NBA namedrop on “Empire State of Mind.” Inaugural lyric of the week: “Jeezy paying LeBron, I’m paying Dwyane Wade.” While many people sing along to the hit song without knowing what the lyrics mean, it’s actually somewhat complex. Young Jeezy often refers to the secret languages of the drug-dealing game, when a player’s jersey number would be code for a dollar amount.

LeBron James wears No. 6, while Dwyane Wade wears No. 3. Therefore, if Jeezy is “paying LeBron James,” it costs him 6K. Jay “pays Dwayne Wade,” meaning he gets a better deal and pays half the cost of Jeezy for the same product. Here is the video below, skip to the 1:53 mark if you want to hear Jay Z namedrop the Heat duo: