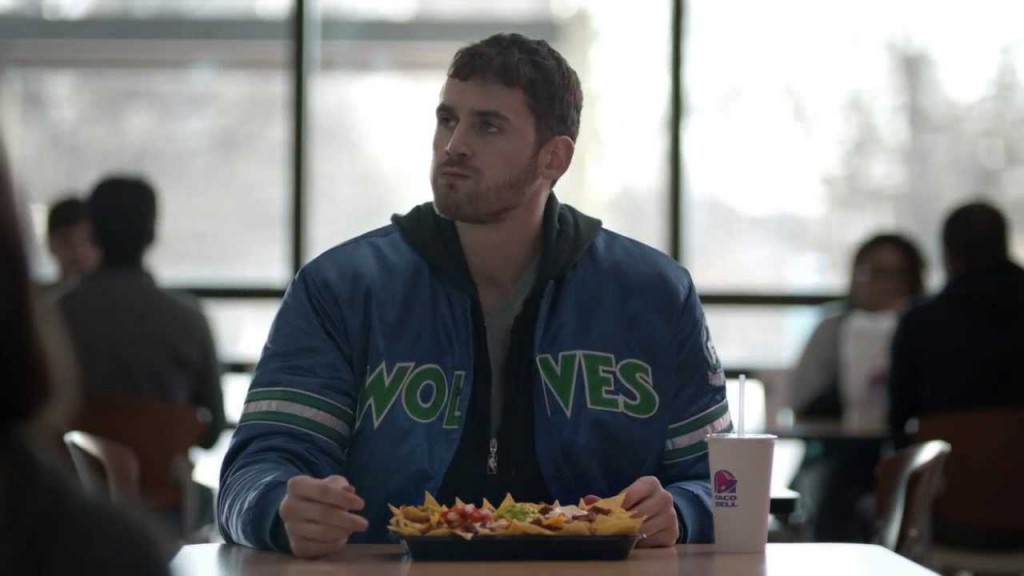 Kevin Love is featured in a Taco Bell commercial. I was ecstatic to see the walking double-double get some well deserved publicity. But what really got me interested in the commercial was the classic satin NBA Starter jacket worn by Love. Seeing the jacket brought back a lot of fond memories. The satin Starter was a must-have for any baller back in the early 1980s. In fact, it was the staple outerwear item of most young athletes.

The Starter jacket was constructed of tightly woven satin, which gave it a shiny exterior; embroidered tackle-twill team name or logo on the chest; an official NBA patch sewn by the right side pocket; ribbed elastic cuffs, hem, and collar; quilted inner lining making the jacket surprisingly warm; snap-button front; Starter logo on bottom sleeve (just to show that your jacket was authentic); and the NBA jock tag inside to write your name, because dudes would attempt to confiscate your garment. The Starter jackets were approximately $100 and in high demand.

Steppin’ to the A.M.

I’m a Knicks fan, Bernard King was my favorite player. So it was a little odd that I bought a Dallas Mavericks Starter jacket. Even though I was also a huge Mark Aguirre fan, I mainly wanted a jacket that no one else had.

I remember saving my money to be able to buy it. In December 1983, my friend Bryan and I took the subway down from Harlem to Madison Square Garden (that’s where Gerry Cosby’s was located, 3 Pennsylvania Plaza in the main lobby). I placed an order for a Dallas Mavericks jacket, $153 with tax. It was the best investment I had ever made at that point in my life.

February of 1984 my jacket arrived. I was the only dude in New York City wearing a green satin with the old Mavericks logo on the left chest. My jacket came a few weeks before the Mavericks came to the Garden. I attended the game and had the opportunity to stand by the Mavericks team bus after the game. It felt great to be greeted by the players, because they saw me wearing an official Mavericks team jacket in New York. I was close enough to the bus to tell Mark Aguirre, “Good game,” to which he replied, “Thanks young fella’.” I was elated! I wore that jacket for the better part of the next four years.

Don’t call it a comeback

It was a delight to see several fans wearing the iconic satin Starter jacket during the 2014 All-Star Game. The jackets have been re-launched and are available in limited quantities at the NBA Store. I’m sure we’ll continue to see fans wearing these jackets during the second half of the season and into the playoffs.