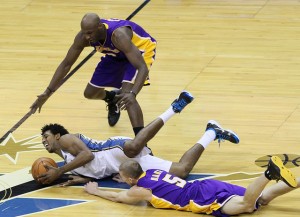 It’s a contentious time in Laker Land these days, but despite that, the team failed to deliver before the NBA’s trade deadline on Thursday.

They did make one move, but overall, their performance and ability to work out deals flopped. This isn’t a Chris Paul or Steve Nash flop, the kind that don’t actually cause any harm. This is a real flop that the Los Angeles Lakers should feel pretty upset with themselves over.

Now, it wasn’t the worst situation ever, because the organization was able to make one move. They traded Steve Blake to the Golden State Warriors, unloading his $4 million contract. In return, the Lakers picked up Kent Bazemore and MarShon Brooks, both of whom are getting paid half of Blake’s salary, and who are also on expiring contracts. In the meantime, they fill up two roster spots for the Lakers, who have more coaches than players on their bench these days.

They are young guys who will likely welcome the chance at getting more minutes since they’re averaging 6.1 (Bazemore) and 15 (Brooks). Both players are also athletic, which is an attribute this Lakers roster needs.

That trade was good, even though it’s hard to see Blake go. He was having his second-best career year in coach Mike D’Antoni’s offense, and seemed to have regained a lot of the athleticism that he’d lost last year. Kobe Bryant voiced his disappointment on Twitter:

No doubt Bryant will miss Blake, but he has to understand that it’s what’s best for the team in the long run. This move alone, however, just wasn’t enough for the Lakers, and that’s why this trade scenario was a flop. There were talks of Pau Gasol to the Phoenix Suns and Jordan Hill to the Brooklyn Nets, but all of those fell through. Meanwhile, the Los Angeles Clippers traded Antawn Jamison to the Atlanta Hawks for cash and Cenk Akoy’s rights, then sent Byron Mullens and a second-round pick to the Philadelphia 76ers for a “conditional” second-round pick. Oh yeah, and this might happen too:

Clippers are a strong frontrunner for Glen Davis should buyout get completed, league sources tell Yahoo.

These aren’t huge moves for the team, but they’re something, whereas the Lakers just dumped Blake’s contract and got two expiring contracts. This also happened, which totally shakes things up:

What all of this means is that teams were willing to deal, but apparently they weren’t willing to with the Lakers. Or it could be that the Purple and Gold were asking too much of teams, relying on the awe factor of Tinseltown to help seal the deal. That just isn’t the case anymore though. With the passing of Dr. Jerry Buss, and the disastrous personnel decisions that have been made ever since have lessened the public’s worth of the Lakers; their image of near-perfect basketball acumen has been tarnished.

It could be that organizations just don’t want to deal with the Lakers anymore. Yes, it’s a bit far-fetched, but why else would a team who needs help at every position do next to nothing when teams were willing to do business?